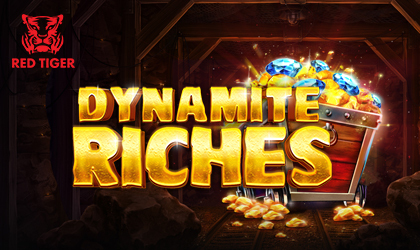 Red Tiger Gaming has just dropped another exciting slot that might test your fear of closed spaces. The game takes place deep underground…

…in barely lit mine shafts. However, this adventure down deep has its perks. Dynamite Riches offers potentially lucrative rewards for those who are lucky enough.

This latest title brings plenty of excitement to those brave enough to deep down a cold, dark mine shaft. Full of suspense, the theme in this slot is all about creating a thrilling environment for the players to experience.

As usual, the graphics from RTG add plenty of depth to the game, increasing immersion and making for a very aesthetic gameplay. With that said, the theme is rather simple. Since the entire game takes place deep underground, the creative team behind RTG’s latest release didn’t have much trouble depicting a dark, narrow mining shaft.

Symbols are very detailed and a proper eye candy for anyone who appreciates a more complex game design.

This slot is rooted in a 5x4 reel grid and 20 fixed paylines. All features aside, this is still a very volatile slot. If that is not enough excitement, there are always the features.

The main attraction is the fuse that sits in the upper right corner of the screen. Every time a wild is drawn, the fuse progresses further. Once the fuse reaches its end, the game unlocks its main four features.

The first feature blows away all of the low paying symbols and makes room for higher paying ones. Next up is the 2x2 or 3x3 wild that brings a decent boost to the reels. There are also…

…Gold Spins where a gold spin symbol can land on any reel. Once three such symbols are drawn, a Gold Spin mode is unlocked.

Red Tiger is an innovative slot game studio that specializes in creating quality, cinematic slots with outstanding graphics and core game mechanics. The company has always been on the edge of technological advance with all kinds of innovative features finding their way into its newest slots.

That hunger for innovation has allowed them to build a massive network of distributors, all of whom have benefited from such content. The brand has recently become a part of NetEnt family, who acquired the company but left it as an independent studio.

Following the tradition of innovation, it has recently released a brand-new game engine called RTG Core. With this improvement in hand, it will offer lighter, better optimized games in the future. The new engine will also give this company a chance to integrate their games much easier into all kinds of existing and new frameworks.