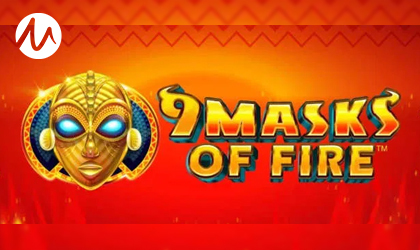 Microgaming, one of the leading software providers in the iGaming industry, has released a brand-new game titled, 9 Masks of Fire. The game takes players all the way…

…to Africa where they will have the chance to potentially win big! Packed with great features, this release promises tons of entertainment as well.

Into the Heart of Africa:

Developed by Gameburger Studios directly for Microgaming, the title represents one of the more refreshing additions to this company’s portfolio. Being their second official release since the studio was founded, the title combines a distinctly African theme with smooth base game mechanics.

Aesthetically speaking, the game is quite simple. The background features a solid color texture with fiery details here and there. Namely, the reels are on fire, which goes perfectly with the name of the game. Symbols are represented by the classics. Players will find lucky sevens, BAR symbols, cherries and others. The base game runs on a 5x3 layout and 20 fixed paylines.

Aside from the base game mechanics, players are treated with several special features. This new slot comes with a wheel of fortune type mini-game that gives players a chance to win one of the numerous multiplier values.

Additionally, there is also a bonus spin mode that can yield up to 30 spins depending on the circumstances.

Matt Carvajal, the Creative Designer of Gameburger, offered his comment regarding the release: “We proudly invite players to come and explore the high-energy world of Africa in 9 Masks of Fire. The game features thrilling graphics and a rhythmic soundtrack that truly embraces the African theme, and the addition of the Free Spin Wheel offers a highly entertaining experience with tremendous win potential.”

James Buchanan, Director of Global Operations at Microgaming, also offered an insight: “Well done to the team at Gameburger Studios for cooking up this fun and engaging take on a popular game genre. 9 Masks of Fire is a high-energy online slot brimming with explosive visuals and a pulsating soundtrack that delivers a dynamic, action-packed and feature-rich gameplay experience.”

Microgaming is one largest software providers in the industry. The company has been around since the early ‘90s and has been pushing the limits of the industry ever since then. They’ve made history by developing the world’s first online casino software.

Only a decade later, the company did it once again when they built the first mobile casino software. Today, it still creates revolutionary software but it also has a large number of 3rd party developers working for them. With such a massive network of partners, the brand has managed to establish a massive network of distributors that includes some of the top operators in the industry.