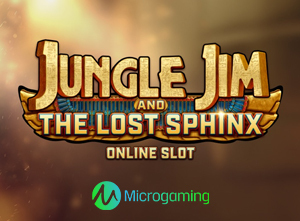 One of Microgaming's most popular adventure slot series has just received a new installment! Namely, Jungle Jim has set out to ancient Egypt to uncover the mysteries of the Lost Sphinx.

Fans of the series have a lot to look forward to as the new game brings everything we’ve loved about the previous installments in addition to the new features.

The Secrets of the Dunes:

…has caused a lot of hype among the fans of the series. From a visual standpoint, the team behind this release went above and beyond. The theme is set in Egypt, meaning that the game is full of Egyptian details.

Players will be wrestling the reels under clear Egyptian skies, navigating dunes and more in this slot!

As far as base game mechanics go, the title features a 5x4 reel layout that runs on 35 fixed paylines. However, this can be expanded to a 5x5 grid and 50 paylines.

Naturally, there are special features included as well. Players can look forward to a bonus spin mode, progressive multiplier trail mode where the max prize is an x20 multiplier, and more.

James Buchanan, Director of Global Operations at Microgaming, commented on the new release: “We are so excited for the return of this iconic character in Jungle Jim and the Lost Sphinx. Jungle Jim is ready to dig up incredible rewards with a win potential of up to 6,250x. The combination of innovative game mechanics and a graphically rich visual experience makes this latest installment of Jungle Jim a game not to miss!”

Terence Igesund, the Executive Producer at Stormcraft Studios, also added a comment regarding the new game: “Jungle Jim is back and ready for his next big adventure! The team at Stormcraft is very excited to launch this long-anticipated sequel, Jungle Jim and the Lost Sphinx. With decades of industry experience behind us, we set out to create a beautifully crafted and highly engaging gaming experience, loaded with innovative features and great win potential. The intriguing storyline supported by Jim’s entertaining antics should ensure that this game becomes a fan favourite!”

One of the oldest and largest software providers in the industry, it is known for developing the first online casino software back in the ‘90s. This company has since remained on the cutting-edge of iGaming technology.

They currently run a massive team of talented individuals who know how the industry breathes and delivers high-quality products accordingly. On top of that, it has a vast portfolio of 3rd party providers who create exclusive slots for this industry giant.