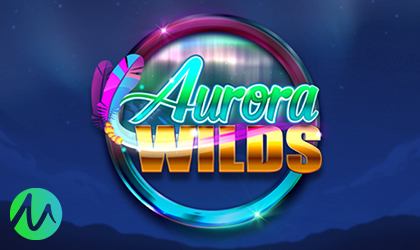 Microgaming has announced the release of a brand-new slot game from their growing collection. Titled Aurora Wilds, the latest addition to this company’s portfolio comes from…

Lights in the North:

Microgaming and Neon Valley’s latest creation marks the beginning of their partnership, but also serves as a showcase of what this young studio is capable of delivering to the market.

This slot brings a number of interesting features that give it a lot of potential. To start things off, it brings a soothing theme with solid graphics all around.

As its title suggests, it features scenery from up north. Simply by launching the title, players will be transported into a mountainous, snow-covered valley illuminated by nothing else but the Aurora Borealis.

The studio behind this slot has put together a relaxing theme that isn’t too distracting nor too simple. Symbol design takes the whole experience even further with its almost tribal design for the lower paying deck, while the higher paying set of symbols features the all too familiar lucky sevens and other traditional choices.

As far as the base game goes, this is a 5x3 grid slot that runs on 10 fixed paylines. The game comes with a number of special features that include bonus spins as well as a potentially rewarding…

…progressive jackpot. Players will have the chance to win a Mini, Minor, Major or Grand Jackpot and potentially boost their balance with considerable amounts of money.

Brian Perego, the Senior Creative Technical Designer at Neon, offered a comment regarding their debut title: “We’re delighted to see our first creation go live across Microgaming’s extensive operator network. Aurora Wilds pays homage to one of nature’s most amazing phenomena and is designed to captivate and reward players with fluid gameplay and big jackpots.”

James Buchanan, Director of Global Operations at Microgaming, has also chimed in regarding the first release from their new partners: ”Aurora Wilds is an enchanting addition to the Microgaming portfolio that features exciting game mechanics with respins and jackpots. The team at Neon Valley have set themselves a high bar with this superb debut slot, which includes absorbing visuals and sounds and has excellent win potential.”

As one of the largest and oldest software providers in the iGaming industry, this veteran of entertainment is known for delivering the world’s very first online casino software back…

…in 1994. Just a decade later they have made another massive contribution to the industry by creating the world’s first mobile casino software. The company has since grown into a powerhouse of creative design and innovative technologies.

Aside from their own ability to deliver high-quality games, it also operates one of the largest networks of 3rd party independent software studios with whom they have exclusive partnership deals.