Microgaming Partners Up with Snowborn Games for Release of the Vault 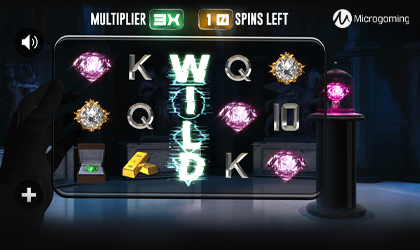 Microgaming, one of the most influential software providers in the iGaming industry, has announced the release of a new slot game in cooperation with Snowborn Games.

…are working together on a slot called The Vault – a game that is promising to bring a variety of awesome features and impressive graphics.

Both brands are preparing a proper adventure for the end of April. This latest game is promising to bring the thrill of the heist to the reels in a spectacular fashion.

The cooperation between these two studios…

…comes as a part of the developer’s effort to sign on up and coming studios. Snowborn is a relatively young team that is working on making a name for themselves.

By joining forces with this studio, it is slowly breaking into the big leagues. All things considered, the new game makes a great first impression for a studio that is just establishing itself in the industry.

Speaking of this slot, players can expect a proper spectacle of graphics and features. Snowstorm is promising unique 3D art as well as a fully developed storyline and characters. With that said, players can also expect a potential max win of 5,000x the original bet.

Overall, the title is likely going to offer much more than your usual slot game experience!

Björn Zethraeus, CEO of Snowborn, commented on the new release: “Through Microgaming’s content aggregation platform, players will be able to enjoy our innovative games with leading operators in all major markets. The Vault displays stunning 3D art and a beautiful visual setting in addition to elegant symbolism to enhance the game’s atmosphere. We are proud to team up with Microgaming and look forward to providing them with many more exclusive games in the coming months.”

Jean-Luc Ferriere, CCO of Microgaming, also offered his take on the new game: “We are pleased to add Snowborn Games to our growing content partner network and look forward to working with the team, who are set to expand our diverse portfolio with unique and entertaining content, starting with their debut title, The Vault.”

He games is scheduled for release April 28th.

Microgaming is one of the largest and most prolific software providers in the iGaming industry. Specialized in high-quality slot games, this company has made a name for itself as being a reliable source of good content. It draws its roots from the mid-90s and is credited with developing key iGaming technologies. Namely, they have developed the first online casino software as well as the first mobile casino software.