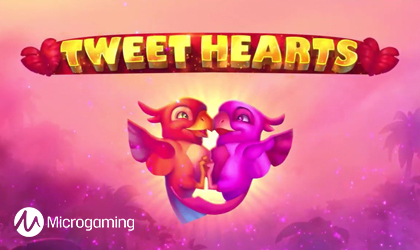 Microgaming has announced the release of its latest slot game titled, Tweethearts. Developed exclusively for their network by Just For The Win (JFTW), the game brings…

…interesting features and relaxing gameplay to its players.

Lighting Up the Skies:

Microgaming and Just For The Win’s latest creation comes across as a seemingly minimalist slot. However, the simplicity of design that can be found in every aspect of this game is just a superficial layer that hides a more convincing gaming experience underneath.

The theme used puts players just above a jungle canopy where treetops meet the skies. The studio behind this slot has achieved a great balance of…

…attractive visuals and animations that give this seemingly simple theme much more depth. With everything associated with birds, it is no wonder that the higher paying deck of symbols is represented by various parrots.

As far as the core game features go, this is a 5x3 grid slot that runs on 17 fixed paylines. The game also brings several special features. These include the Double Lucky Line, Random Wilds, Bonus Spins and three different types of wild symbols.

Each feature is designed to complement the base game in ways that feel organic and natural. In that sense, the title brings rather engaging gameplay.

James Buchanan, Director of Global Operations at Microgaming, offered a comment regarding the new game: “Marking the fifteenth game developed by Just For The Win exclusively for Microgaming, Tweethearts combines colorful graphics, an idyllic atmosphere and a serene soundtrack to create a truly unique and charismatic slot. Random Wilds in addition to the Double Lucky Line feature adds another element of excitement to the gameplay, and this new title is set to entice players of all levels.”

Johan Persson, CEO at JFTW, also added his thoughts on the new release: “We are thrilled to introduce Tweethearts, a vibrant online slot sending players soaring deep into the heart of a secret jungle and delivering exciting gameplay along the way. The action never stops in this tropical love bird themed game, with the Double Lucky Line feature and an array of wilds driving the action throughout. The free spins feature can be exceptionally rewarding, with win potential of up to 2,500 times the initial bet. We can’t wait for players to experience the sights and sounds of Tweethearts’ jungle paradise.”

As one of the industry’s oldest, largest and most trusted content providers, this iGaming veteran has been active since the ‘90s when they spearheaded new technologies across different niches.

Today they offer a massive portfolio of games, employ one of the largest teams in the industry and have an army of exclusive 3rd party providers who are constantly churning out quality new games.