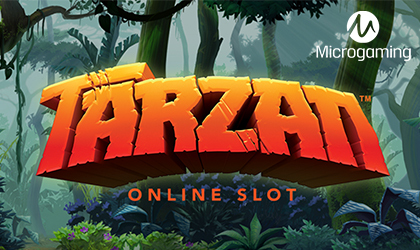 Microgaming, a premier software developer with offices all around the world, has announced that it has secured a renewal of the Tarzan brand licensing deal.

As a result, it is putting a plan in motion that will result in a brand-new game inspired by the iconic character, built from scratch.

The Return of the Legend:

The developer has initially signed the deal with Edgar Rice Burroughs Inc., which was brokered by Creative Licensing Corporation back in 2016. The two parties have come to terms that have led to the creation…

…of the first Tarzan branded online slots. With a very successful initial release of the original game, the supplier has decided to renew the licensing deal in order to start working on a brand-new title. That new game…

…that is in the works will be a completely fresh design. The idea behind this project is to bring Tarzan back with new features, fresh graphics and more. With that said, the brand isn’t the company that is going to be taking care of this project. Instead, they have delegated the design and production of the new game to Fortune Factory Studios – an independent software provider that is developing exclusive games for the developer.

Working directly with Edgar Rice Burroughs Inc. has allowed the supplier to stay true to the Tarzan brand and create new adventures for this legendary character. Fans of the series will absolutely love the new game when it comes out.

Speaking of which, the company will be announcing the name of the new game as well as presenting more info regarding its release during ICE London 2020.

James Sullos, President of Edgar Rice Burroughs Inc., commented on the new deal: “Our extended deal with Microgaming will see the creation and launch of a new Tarzan game, which we are confident will build on the character’s successful first outing with the renowned supplier. We look forward to working with Microgaming and are excited to see the game come to fruition.”

Jean-Luc Ferriere, Chief Commercial Officer at Microgaming, also shared a comment: “We are excited to extend our brand partnership with Edgar Rice Burroughs Inc. to create the next iteration of Tarzan, a timeless character and brand with worldwide appeal. The upcoming game from Fortune Factory Studios will be one of several new branded slots to launch on Microgaming’s platform this year as we continue to diversify, extend and refresh our content offering.”

The final release date and when the game will appear in online casinos should be announced at ICE London 2020.

Microgaming is one of the oldest and most respected companies in the industry with over 3 decades of experience. The team behind this brand has made serious contributions to the development…

…of core iGaming technologies, including the invention of the first online casino software back in the ‘90s. Today the company creates impressive games all while running a sizable network of 3rd party providers who supply exclusive titles for this giant.