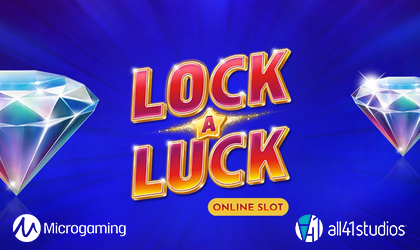 Microgaming has announced the release of a new slot game titled Lock a Luck. This release doesn’t come straight from this developer, but rather from one…

…of their 3rd party partners who develop games exclusively for this company. All41 Studios has done a great job of putting together a fun and potentially lucrative slot.

Classic Aesthetics in a Modern Slot:

The latest addition belongs to a category of classic games. It is one of those slots that don’t…

…rely on a complex theme to be entertaining. Speaking of the theme, it’s a Spartan one, to say the least. The studio behind this release has used a simple, blue background to give contrast to the reels and what’s happening on them.

It is arguable that this slot is performance-oriented in the sense that there is nothing to draw one’s attention from the reels.

Symbol design brings familiar icons that any fan of slots will immediately recognize. All41 Studios went with a mix of card royals which are used for the lower paying set, and the Lucky Sevens, diamonds, cherries and other classics.

As far as features go, the core game is all about the old school approach to winning. At its center lies a 5x3 grid layout that runs on the all familiar 243 ways to win mechanic. This alone makes it a medium volatility game, meaning that it will be interesting to those who want a casual gaming experience but also those who want something more.

The features that appeal to the latter of the two groups come in form of Locking Reels, Lucky Highs and Wilds. Overall, nothing too crazy, but more than enough to keep things interesting. The Locking Reels feature allows players to lock reels, starting with 2 with the option of expanding up to all 5 reels.

In combination with other features, there are plenty of potential opportunities for lucky players to score a decent win. For a classic game, the title does a good job of capturing the essence of this genre and rewarding players with a great set of features.

Microgaming is one of the oldest software providers in the business. Founded in the early ‘90s, this company has been on the edge of technological advance when it comes to iGaming technology. So much so that they have invented and built the first online casino software to appear on the market back in 1994.

Just 10 years later, they were credited with inventing the first mobile casino software, thus bringing the iGaming experience to mobile devices worldwide. Today, the brand employs a massive team of professionals who still work hard on improving the gaming experience. At this point they also have a network of 3rd party software providers who create exclusive titles for them.