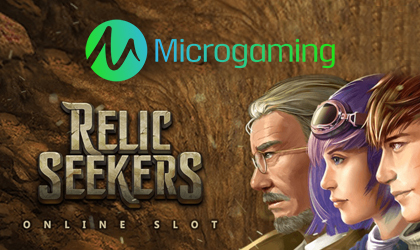 Microgaming has announced the release of Relic Seekers, a brand-new adventure-themed slot game that takes players on a wild ride.

The game combines a unique theme with great features and a solid base game mechanic.

The developer’s latest slot, developed exclusively by Pulse 8 Studios, adds a unique take on the whole ancient Far East theme. They have…

…added a new spin that gives them an edge in this niche category.

The game follows three main characters, Free Man, Professor Morgan, and Nora as they navigate the ancient tombs of the Dragon’s Vein.

Theme design does a perfect job of depicting a cramped space of an underground tomb, thus adding a lot to the immersion.

With an animated frame and symbols, this game promises a theatrical experience.

Underneath the intriguing aesthetics lies a fleshed out base game that runs on a 5x3 grid with 25 paylines.

Tell Me About the Features:

Microgaming has also included a number of interesting special features that spice up the gameplay even further, offering a more intriguing user experience.

… Symbol Turn Wild is triggered when players trigger this feature consecutively. This mode progressively turns more and more symbols into wilds, which improves the player’s chances of scoring a potentially big win.

Aside from these features, Relic Reel also offers the extra spin mode where players can get 10 extra spins. This is also where another mini-game is triggered. During this mode, players will collect secret keys that are randomly generated. Once enough keys are collected, players can unlock additional extra spins with a 2x multiplier.

James Buchanan, Director of Global Operations for the supplier, offered a comment regarding the new release: “Offering an immersive playing experience with captivating visuals and features, Relic Seekers sets the bar high for future releases from Pulse 8 Studios, who we are delighted to be working with on an exclusive basis.”

The release is currently available exclusively at all affiliated online casinos.

Microgaming is an award-winning software provider that has been operating in the industry since its inception. In fact, this company was the first one to design the first true online casino back in 1994. Their next major contribution to the iGaming world was the invention of the first mobile casino software in 2004.

Since then, they have become a proper driving force in the industry, supplying most of the tier 1 operators around the world. Even so, it continues to strive for perfection and offer their clients innovative, high-quality solutions.