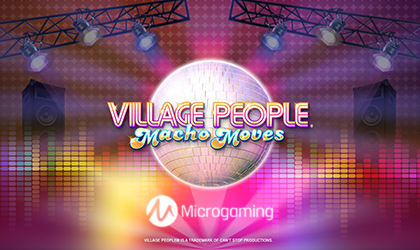 Are you ready to party?! Microgaming has released one of the grooviest games to ever hit the market. Village People Macho Moves brings that ‘70s vibe en masse!

The thing that sets it apart from the rest is the fact that it is a fully endorsed Village People title. That’s right! Players will be treated with some of the greatest VP hits such as Y.M.C.A, Macho Man as well as In The Navy.

This new online slot release immerses the player in a classic, vintage disco ambiance. There is the backlit floor, disco ball, spotlights and all the other elements we would see in such an environment.

As far as base game mechanics go, this title brings six different types of wilds. As many have anticipated, all of the members of the Village People are represented in the game. Each character offers different bonuses that range anywhere from walking wilds, massive multipliers, locked wilds and much more.

The overall atmosphere is a fun one. The game’s theme is exactly what you would expect from the branded release. Jean-Luc Ferreire, Microgaming’s Chief Commercial Officer, said: “Big, bold and brilliantly fun, Village People® Macho Moves brings the sights and sounds of the legendary disco group into the world of online slots. The game encapsulates all that’s great about the iconic band, with five of their most famous songs playing on rotation and all six band members making an appearance as fully-animated characters. Fortune Factory Studios have excelled in creating a feature-rich branded slot experience with wide appeal and fantastic win potential.”

That is definitely one way to describe this game. Fortune Factory Studios didn’t spare any effort when making this title.

Phelan Sykes, Head of Game Production and Fortune Factory Studios, has: “Creating a slot game based around an iconic brand like the Village People® was an inspiring prospect for us at Fortune Factory Studios. In Village People® Macho Moves, we’ve set out to embody the timeless energy of the band. Music is central to the experience, and the built-in VP jukebox gives players a choice of the group’s biggest hits to play as they enjoy a breadth of inventive gameplay features. Our range of Macho Moves mechanics also adds a unique depth to free spins, offering players significant win potential of up to 5,845 times their bet, with the extra thrill of seeing the amazingly animated characters boogie down.”

Upon launch, the game is currently available exclusively at participating Microgaming online casinos.

The Isle of Man-based firm is by far one of the oldest and most trusted names in the business. They are known for developing the world’s first actual online casino software all the way back in 1994. Just ten years later in 2004, they have developed the first mobile casino software.

Over the years, this studio has released a number of legendary titles which include the officially sanctioned ones like the Village People Macho Moves, Game of Thrones, Playboy Gold and more.