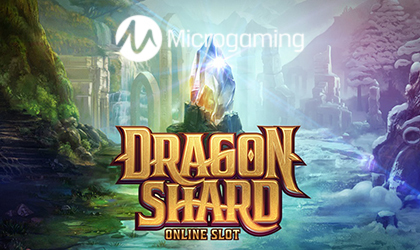 It’s time to witness a battle of epic proportions. The only way to do that is to immediately launch the latest reel slot by the talented people from Microgaming and just enjoy the ride. It is titled, Dragon Shard and promises players a lot of entertaining moments.

More About the Game:

It features two elemental forces that have collided over almighty Dragon Shard. Generally speaking, this 5x5 reel slot comes with 40 pay lines and offers gamers unbelievable features, as well as astonishing graphics and other visual elements that will take players’ breath away.

No wonder this game looks so marvelous when it was designed by the creative and passionate people from Stormcraft Studios, exclusively for Microgaming. These gifted individuals were the ones who made Fortunium and Agent Jane Blonde Returns.

For those who are not lovers of computers, we’ve got some good news for you – this game is also fully optimized for a premium portrait gameplay experience on mobile. There are numerous features that will keep players wanting more – Win Booster (that can be tested out during a journey through a magical realm).

The other one can be triggered by revealing various hidden wonders that can be found below the Mystery Symbols and in casino spins with Mystery Reels.

At some point during play, the Fire Queen and Ice King will face each other with a goal to grab the arcane powers of the Dragon.

They may also potentially appear as high value stacked icons, while all other characters, including both of their dragons are double stacked. Prizes could potentially be increased once the super stacked Mystery Symbol appears to join the fray and, at the same time, uncover a wild or any other high or low icon.

Ultimately, this is the perfect opportunity for users to fill the reels with amazing wins! If the Win Booster demonstrates its power, it will cause Mystery Symbols to turn into wilds and other high-paying symbols and will stimulate all other winning lines to be generous and pay both ways.

Wait For The Scatter:

We mustn’t forget them. If at least three of them are seen across the reels they will summon the elemental sorcery of the mythical, fire-breathing creature, coating the ethereal realm beyond the reels in ice and rewarding players with ten slot spins. Here it is important to see how much scatters have landed because depending on this number, the frosty bonus features up to three Mystery Reels. Each of these comes with unlimited stacks of Mystery Symbols and Reels and they are randomly triggered between reels two, three and four during each spin.

Jagoda Barber, Head of Games at Microgaming commented on this release by stating:

“Dragon Shard is another exceptional addition to Microgaming’s innovative slot portfolio from the talented team at Stormcraft Studios. They have realised a visually and aurally immersive world of sword and sorcery, which particularly shines in portrait mode on mobile. The game’s feature set is just as deep and rich as its presentation, with the Win Booster™ further enhancing the power of Mystery Symbols and Mystery Reels™ in free spins, which offers excellent win potential for any player lucky enough to land five scatters entering the bonus, particularly if the Win Booster™ is enabled.”

“Crafting the magical world of Dragon Shard has been an immensely exciting endeavour for us at Stormcraft Studios. We carefully integrated successful and inventive game mechanics with a relatable fantasy theme, completing it with beautifully rendered visuals and an epic soundtrack. We’re looking forward to welcoming players into the magical realm of the Fire Queen and Ice King, and providing them with a thoroughly entertaining gaming experience.”