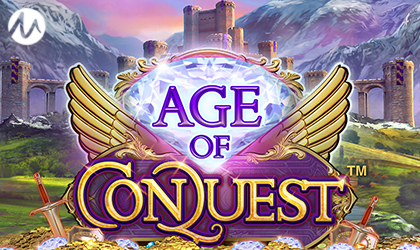 …software providers that deliver exclusive content for the developer. The new title is packed with awesome visuals, great features, and more.

The World of Magic and Steel:

The Isle of Man-based brand’s latest addition to its exclusive features an immersive theme. The setting takes place within a valley where a massive castle sits silently between two snowy mountain ranges.

The background can change depending on what is happening on the reels and players can go from the outside, into the castle itself.

Symbol design is interesting, to say the least. The team behind this release went with the usual card royals for the lower-paying set while the higher paying set features Magic items, mythical creatures as well as expanding symbols that can cover the entire reel. These expanding symbols depict the two main characters of the game and they definitely add plenty of immersion to the whole experience.

The 5x3 slot game runs on 20 paylines. Considering the expanding symbols, it’s fair to say the base game has plenty to offer on its own.

The game does come with special features, although they are…

…few compared to most similar releases out there. One glance at the top of the reels will reveal several slots for what appear to be diamonds. Each reel can take two. Once both slots are filled, this triggers the Wild Reel feature.

All positions in that reel will be packed with wilds. In addition to this feature, players can also look forward to a Bonus Spin mode that offers 2, 8 or 25 bonus spins in total.

Microgaming is one of the leading brands in the iGaming industry. The company was founded back in the early ’90s and has since contributed greatly to the development of the iGaming sector as a whole. Namely, they’ve created the first online casino software in the ‘90s, only to create the first mobile casino software roughly a decade later.

Today, it runs one of the largest content creation groups in the business. Aside from its own content, it also offers games made by partnered studios who deliver its games exclusively.