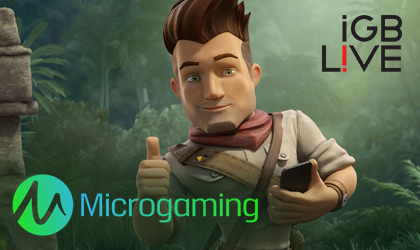 Jungle Jim, one of Microgaming’s most popular characters, is back in the saddle with another awesome adventure. This time around, he’s taking on Egypt and uncovering the mysteries of the sphynx.

The game is going to be presented at iGB Live! this week as a part of the company’s showcase event. They will be presenting a few more titles at the same time, which is why this event is already generating much hype.

The company’s presence at iGB Live! is going to revolve around their new titles and planned releases. They have created a special stand for this purpose alone. Jungle Jim’s adventures represent one of the most popular titles from this software provider. The latest installment of this online slot saga was developed by the same studio that did the last one – Stormcraft Studios. This highly motivated team is responsible for titles such as Agent Jane Blonde Returns, Dragon Shard, and Fortunium.

The game is rumored to feature a 5x5 reel layout and 50 fixed paylines. From what little information is currently available, this new game will be available in select online casinos sometime in November of this year. Those who plan on visiting the iGB live! will be able to demo the game.

Jean-Luc Ferriere, Chief Commercial Officer at Microgaming, offered his insight on the new release: “Given the success and popularity of Jungle Jim El Dorado, we are really looking forward to teasing the iconic character's next outing, this week at iGBLive! The new game includes outstanding artwork and entertaining mechanics, including the popular Rolling Reels™ feature, and Stormcraft Studios have set a new benchmark in visual storytelling in our industry.”

What everyone is expecting from the Isle of Man giant and Stormcraft Studios respectively, is a fine-tuned, polished title. The original game was revered for its detailed graphics, smooth gameplay, and interesting storyline. Although this new installment has a fairly big pair of shoes to fill, the overall consensus is that this software provider is up for the task. We will know more about what to expect after the July 17 and 18 showcase events. Until then, we will have to settle for teasers and sneak peeks.

Located on the Isle of Man, the supplier is one of the largest and most respected software providers currently operating in any market. Now a multinational company, this brand started out as a small development team in the early ‘90s. They were the first to come up with a true online casino software back in 1994 while they pulled a similar feat in 2004 with the first real mobile casino suite.

All those decades of experience have paid off in dividends thanks to a policy of sustainable growth and expansion. Today, it is supplying some of the largest operators in the industry with cutting edge technology and games.