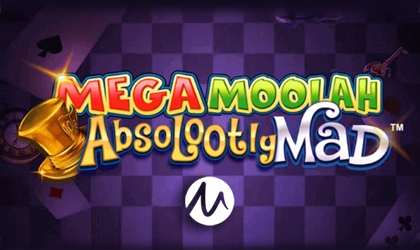 Microgaming is bringing on the heat with Absolootly Mad: Mega Moolah – their latest addition to the progressive jackpot network.

The game offers plenty of potential…

…to hit it big. Developed exclusively for the developer by Triple Edge Studios, the title promises to be one of the more popular slots this year!

The supplier, with the aid of Triple Edge, is expanding its Mega Moolah progressive jackpot network with a fresh slot, looking to bring more exposure to their jackpots. As a reminder, they have previously released two games to include this feature. Aside from the jackpot, the new title offers interesting features of its own with its Rolling Reels and Multiplier Trail.

The game is obviously inspired by the very popular story of Alice in Wonderland. This explains both the theme and a variety of familiar symbols that will appear on the reels.

Brendan Walton, Triple Edge Design Lead, said: “The team at Triple Edge Studios is extremely excited for the release of Absolootly Mad: Mega Moolah. This new game offers an abundance of whimsical charm, stunning bespoke art and most importantly tremendous win potential, complete with resplendent features including, Rolling Reels™ with a multiplier trail, free spins and to top it off a golden coin collection that may grant entrance into the Mega Moolah jackpot bonus.”

Jean-Luc Ferriere, Chief Commercial Officer of Microgaming, said: “Triple Edge Studios have excelled in the development of Absolootly Mad: Mega Moolah, a feature-rich slot that builds on the remarkable success of Microgaming’s progressive jackpot network, which continues to break records and award life-changing wins. The latest title marks the third progressive slot from Microgaming this year, and we look forward to continuing this momentum of further strengthening our network to offer even more entertaining gameplay experiences to our customers and their players.”

Founded in the early 1990s, Microgaming grew to become one of the leading authorities in the world of iGaming. This company is not only responsible for some of the best slots on the market, but they’ve also directly propelled the industry forward with their innovative technologies. Namely, it is credited with building the world’s first online casino software back in the mid-'90s while they are also the ones behind the world’s first mobile casino software that came 10 years later.

Today, the supplier builds and produces some of the highest-rated slot games in the industry. The company employs hundreds of employees from all over the world. On top of that, it also runs a partnership program, offering content from a number of 3rd party software providers.