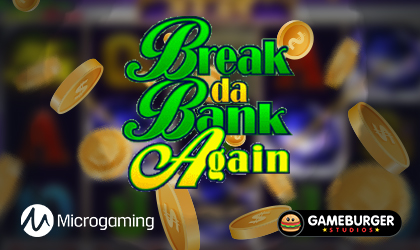 Microgaming has announced that they are expanding their list of independent game contractors with a brand-new software provider. Gameburger Studios is a newly founded studio…

…that has already released their first game. As a part of Microgaming’s large family of developers, this company will develop exclusive titles for various markets.

Gameburger is one of the youngest software providers in the industry. They were founded earlier this year and have already put together a promising slot game titled, Break da Bank Again Respin.

Driven by innovation, this newly founded studio is all about delivering the next-level gaming performance to various markets. With that said, the company will mostly be focusing on…

...classic American-style slots and will be experimenting with the latest in-game mechanics, high-end graphics as well as innovative features.

Their first game, Break da Bank Again Respin, will be its first release as well as the first exclusive release for Microgaming.

With a solid core game and impressive visuals, this slot will greatly benefit from the leading developer’s Respin mechanic. On a similar note, this game offers an optimal environment for this feature to be showcased properly.

A Word from the Reps:

Joe Coleman, CEO at Microgaming, offered his comment regarding the new partnership: “We are thrilled to welcome Gameburger to our global network of independent game development studios. The team’s experience and personality, coupled with their relentless drive to innovate, will serve us in good stead as we continue to supply the market with unique, feature-packed content.”

Matt Carvajal, the Creative Designer at Gameburger, added: ”We are very excited to collaborate with Microgaming and look forward to providing the leading supplier with fresh new content for their extensive portfolio of operators. Our mission is to entertain, innovate and deliver the very best gaming experiences with a classic American style, and we are determined to serve up only the very best of the best. Break da Bank Again Respin offers fans and new players all the key ingredients of the original game, combined with the popular Respin feature and elevated with vivid artwork, sounds, and higher RTP.”

The first game will go live next week.

… a massive amount of independent studios under their wing. They have offices all around the world and employ one of the largest teams in the industry.

As of right now, this company is leading the iGaming industry from the front, exploring new technologies and pushing the limits of online casino content.