Meet An Adorable Hero In The New Endoprhina Slot 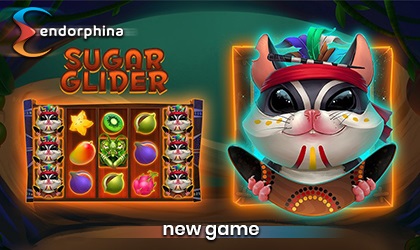 Endorphina has been very busy over the last couple of months. Their latest product is going to make you smile, because you’ll be joining force with a cute, furry sidekick. Let’s see meet her!

This Czech provider gave their players a hint a few weeks ago, regarding this slot machine. Still, no one knew anything more precise (the release date, more details, etc.). During the Sigma exhibition that is currently placed in Malta, things became clearer!

Since it was their first exhibition, everyone was focused on them, therefore, they weren’t able to hide their secret anymore. Everyone who came was able to get a glimpse of this slot machine in their special hidden room.

Furthermore, four days ago they finally presented their new game called, Sugar Glider! The anticipation has finally come to an end!

More About The Game:

Sugar Slider is a vibrant and joyful game that brings you an adorable superhero in the shape of a squirrel. Their idea was to design a tropical forest that is going to be a home to various species and that is also the source of yummy, unusual fruits.

Its main character is here to help you defeat the evil creature called Praying Mantic and at the same time bring you solid rewards!

Now… What Does It Have?

Ten pay lines, five reels and three rows are part of this video slot. Now, this may come as a surprise but this game doesn’t actually have extra spins features, scatters or anything similar to that. It does contain a wild which can expand to other positions and at the same time replace other icons, but that’s about it!

We previously mentioned that Endorphina has been pretty busy lately due to their latest video slot releases. One of them is Dia De Los Muertos, a spooky slot machine that has arrived just in time for Halloween.

Notwithstanding it may look creepy at first glance, it is an actual homage to Mexican tradition around the Day of the Dead (that’s a translation). It showcases how these people celebrate and cherish their ancestors and the things they do to prepare themselves for this important day.

It comes with a lovely graphics and brings along twenty bonus games! As soon as you activate them, you will notice a slight design change. Very nice, indeed!