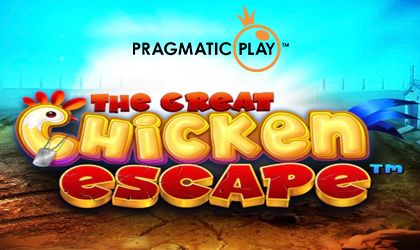 Pragmatic Play has released a new action-packed slot titled, The Great Chicken Escape. Based on the…

Paced with awesome features and a great story, this game promises a great time.

This latest creation from Pragmatic Play features a captivating theme that puts players in the middle of a great adventure. Loosely based on a popular movie plotline, the game brings a thrilling experience despite the obvious and disappointing lack of one, Steve McQueen.

The theme is one of the highlights of the game. Set in a fenced-in farm that suspiciously resembles a POW camp this slot puts players in the thick of it. The only way out is to dig out a tunnel under the fence and escape to freedom.

That won’t be an easy task thanks to nearby guard dog tasked with keeping the chickens well within the camp.

Symbol design is another area where the brand has obviously invested some time and effort. Lower paying symbols are represented with card royals, while the higher paying ones are represented by portraits of the escape crew.

Its elaborate theme and high-end graphics aside, this title stands out due to the in-game features it offers. The team behind this game has chosen to run it on a standard 5x3 grid that utilizes 20 fixed paylines. The estimated RTP value for this game is 96.5% while players can look forward to a minimum to maximum bet spread of 0.20 to 100.

All of this translates to a fairly volatile title with plenty of excitement to offer to players who appreciate a more thrilling ride.

On the other hand, there are features such as Secret Tunnel Bonus and Poultry In Motion which are both mini games. Players will also have the chance to experience a number of bonus spin modes as well as the Big Money Bonus that is also a mini game feature.

Needless to say, the release is packed with all kinds of awesome features that bring an already great game to a whole new level.

The title will be available in Pragmatic-affiliated online casinos.

Pragmatic is one of the leading content providers in the iGaming industry with a massive portfolio of innovative games. This company also offers live casino as well as bingo games, all packaged within their One Single API.

With multiple awards and multiple winning products, it has become one of the most trusted software providers in the industry. Their current lineup of products includes titles available in 31 languages and currencies, both on mobile and desktop platforms.