Magic Stars 5 Slot to Light Up the Sky with Features 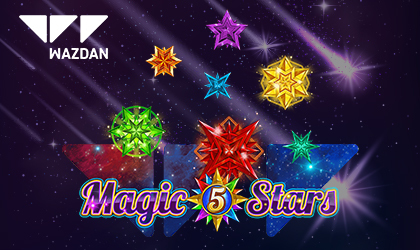 Highly-reputable video slot developer, Wazdan, always likes to surprise their fans by making something interesting. This time, we talk about their newest game that is surely going to stimulate players to give every bit of energy to grab cool prizes.

They just launched an amusing Magic Stars 5 slot machine as the latest part of their Magic Stars series.

During one of the most popular events in the industry, ICE London 2019, they announced the release of this game and now it is officially available to everyone!

Wazdan developed an action-packed game that is filled with valuable rewards and offers users an unforgettable experience where they will get an opportunity to see magical stars up close.

This game consists of five reels and twenty pay lines, as well as wonderful animation, outstanding graphics and sound effects that will make you forget about reality. Furthermore, they wanted to provide their players with amusing gameplay, filled with exciting moments.

It enables you to strike the scatter character as frequently as you want since it pays at any position on the reels. What we loved about it is the fact that each time a user wins, it is followed by shimmering light effects which become even more spectacular once a huge win is launched.

Moreover, this game can be played at some of the biggest names when it comes to casinos and it is equipped with an outstanding Unique Wazdan Features, such as Double Screen Mode, Volatility Levels, Unique Gamble Feature, Saving Mode, Ultra Lite Mode, Ultra Fast Mode and a brand-new innovation called Big Screen Mode!

It’s worth mentioning that this slot machine can be played on any device, meaning computer, smartphone and tablet.

“We are truly excited to launch Magic Stars 5 and were thoroughly pleased and encouraged by the overwhelming reception the game had at ICE London 2019 earlier this month. Magic Stars 5 is a proud addition to the Wazdan portfolio, which is a vibrant mix of more than 110 HTML slots, table games and video poker games, all our new games are fully loaded with Unique Wazdan Features that set them apart from the competition.”

They have left a successful year behind. Why is that? It’s because 2018 was filled with sensational partnerships and games. When it comes to 2019, this is their second slot machine.