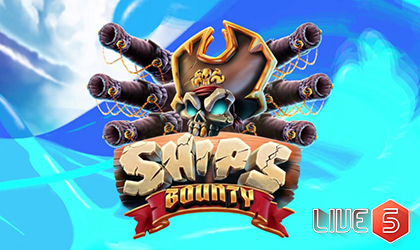 What lies under the sea? Up until fairly recently, we simply didn’t know. Tales of leviathans and monsters of the deep were a common theme back when humans first started navigating the seven seas. Live 5 Gaming’s latest release expands on this part of human mythology with Ships Bounty – a slot game that is packed with all kinds of cool features.

With this release, the studio has decided to debut a game that stands out in every way imaginable. From an intriguing theme, potentially promising jackpots to a fairly unique base game mechanic, the title promises to be one of the more popular in this quarter. Especially if players respond well to any of its numerous, interesting features.

Game Mechanics On a Different Level:

The game’s pirate theme does a decent job of masking all of its innovative features. This is one of those rare titles that sports 5 reels and up to 7 rows. Where the base game really starts to stand out is the progressive row mechanic. The player starts off with 4 unlocked rows and stands to gain access to a maximum of 7 as the game progresses.

The studio responsible for this online slot has chosen not to go with fixed paylines. Instead, the game uses a modified type of 243 ways to win mechanic. The main difference is that with up to 7 rows, the player is presented with up to 16,807 ways to win. That feature alone makes the game much more attractive to a wider selection of players.

An Exclusive Release for William Hill:

Live 5 has launched this game as an exclusive release for William Hill Casino. The game belongs to their premium segment which includes other exclusive releases. Chief executive officer Lloyd Butler offered his comments regarding the launch of Ships Bounty:

"We are delighted to continue the success of 'Live 5 Premium' content by releasing our latest exciting Live 5 Premium game exclusive to William Hill. Our teams have enjoyed working closely together to create a truly engaging game. We would also like to thank SG Digital for delivering Ships Bounty. Ships Bounty offers excitement, innovation and is fully localized."

Both William Hill and Live 5 are expecting positive feedback from their user base.

Live 5 is a UK-based software provider that is slowly but surely securing their place near the top of the industry. Ran by a team of motivated and skilled individuals, this studio takes pride in delivering innovative games to their clients.

So far, they have established exclusive deals with some of the largest names in the business, thus securing their role as one of the leading software providers on the Old Continent. That is a massive amount of success for a team that is not that large. However, with recent growth, chances are that this studio will see expansion in the near future.