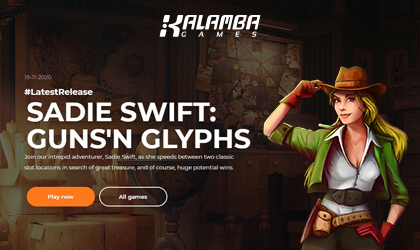 Kalamba Games, an online casino content developer, has released a new video slot called Sadie Swift: Guns 'n Glyphs. The slot was developed in collaboration with the CasinoTest24 and is trying to bring two completely different worlds together where the game delivers few interesting options for the bonus round. The action takes place on a 5x3 grid with 20 active paylines where players can set bets between $0.35 and $70 per spin. This is a high-volatility title packed with an RTP of 96.24%, which will be pretty appealing to the players considering that this percentage is above the average.

Alex Cohen, COO and co-founder of Kalamba Games, said: “We were thrilled to announce this industry-first venture earlier this year and are very pleased with the result of our collaboration. Working with Casino24 has been enlightening and by getting a player’s perspective on everything from the theme to the gameplay and mechanics, we have created a slot that is sure to appeal to a broad customer base. Combining our most popular mechanics, HyperBet and HyperBonus, with two player-favourite themes, Sadie Swift: Guns ‘n Glyphs offers two epic adventures in one.”

Hauke from CasinoTest24 added: “The selection of slots available nowadays is so big that it’s hard to stay competitive and you need something really good to keep the players playing. Sadie Swift: Guns ‘n Glyphs is certainly not a clone and definitely brings something fresh for players.”

Kalamba Games is a relatively new online casino software provider that certainly puts high-quality content in the production of its games. The company operates from its headquarters in Malta where it especially puts focus on producing thrilling and entertaining online slots. Its games contain a large assortment of different topics which means that all kinds of players can find titles which they prefer in the provider's lobby of games. Its top-performing and massively popular games are Double Joker, Fire Eagle, Tiger Claws, Dino Odyssey and Goldfire 7s. Besides an office in Malta, it also has offices in Poland, in Krakow city. The company started operating in December 2016 and was founded by industry veterans with significant experience in both land-based and online casino games with RMG support.