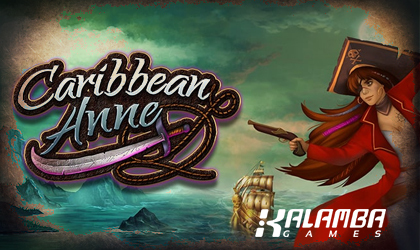 Kalamba has announced the release of a brand-new pirate adventure on the seven seas. Titled Caribbean Anne, the new game…

Kalamba Games is the latest brand to use the well-known pirate theme. However, the company has added its own spin that puts this title above average. The theme itself shows how…

…much effort went into the graphical aspect of the game. Such an obvious upgrade is most likely the result of the supplier’s contracting Graham McAllister – their new UX consultant who has done work on both the audio and visual side of the game.

Fans of engaging backgrounds and animated details will rejoice as the title brings plenty of both. The team behind the game has achieved a high level of immersion with this one, giving players a very attractive package to look at as they spin the reels.

The studio has also done a lot in terms of core mechanics and special features. The game uses a 5x4 grid with 40 paylines and a theoretical estimated RTP of 93.52%. With all features accounted for, players have a chance to hit the max bet value of 5000x the original bet. Such stats place this release in the high volatility category.

Special features are plentiful. The team behind this game has added their well-known Hyperbet, HyperBonus and Bonus Jackpot features, making this latest output a potentially highly rewarding slot.

HyperBonus and HyperBet features allow players to instantly access various features of the game such as extra spins and more. In other words, the developer has given players additional control over the game.

Bonus Jackpot represents a standard progressive jackpot feature that offers 4 levels of personal PJPs. Lastly, there is the Locking Multiplier Wilds feature that can be used along with the above-mentioned features. With locking wilds, the game turns into a truly thrilling experience.

Alex Cohen, COO and co-founder of the company, offered his thoughts: “Caribbean Anne’s customisable volatility appeals to a range of player types from old salty seadogs to casual sailors, leveraging new animation technologies to create highly immersive gameplay. We constantly strive to deliver innovative mechanics that boost revenue for operators. With our most successful and popular features, Caribbean Anne is set to become a top performer of our portfolio.”

Kalamba is an international games studio with headquarters in Malta and Krakow. The company focuses mainly on producing high-quality slot games as well as other online casino content. Despite making an impact on the industry, it is a relatively young company being founded in 2016.

It has a policy of releasing one game per month, which is what many see as the explanation for such a steep rate of success.