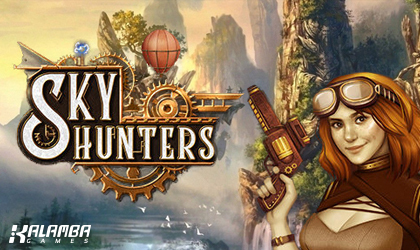 Kalamba Games is all about dropping spicy titles this year. Being one of the leading software providers has allowed the brand to keep up with the release.

One of the latest games to be added…

…to its portfolio is the Sky Hunters – a new slot that features a unique, steampunk theme. Aside from looking cool, players are in for a potentially lucrative ride thanks to the built-in features.

Steampunk on a Different Level:

The provider has done it again; it has managed to create an electrifying adventure that is about as unique as they come.

…roaming the skies win their island ships. The theme is all about steampunk. It oozes this unique style wherever you look. Speaking of looks, the background is quite impressive. If you’re into abstract visuals, you’re in for a treat!

The background is animated and depicts a number of floating islands that are somehow flying through the air in a tight formation. Out in the distance beyond the clouds, players might notice airships and hot air balloons traversing the skies.

Symbol design comes in the form of card royals for the lower-paying tier, while the higher paying tier features the main characters of this game.

The 5x3 reel slot runs on 20 fixed paylines. It is simply packed with special features of all kinds.

For starters, the developer decided to add its…

…Hyperbet feature where players get to select the win multipliers and more. Then there’s the Hyperbonus. This is a feature that players can use to trigger the Bonus Spin mode without having to trigger it the regular way.

These two game mechanics are there to spice things up and allow you to fully customize your experience.

Aside from these, players can look forward to the regular Bonus Spin mode as well as the LuckyLoops feature. LuckyLoops drops a special character every 10 spins that turns into a special expanding symbol.

The modern iGaming industry is a highly competitive place. However, that didn’t stop Kalamba from becoming one of the leading brands in the business despite being found in 2016. The company is all about making quality games for fans who want something new and exciting.

It has invested a lot of effort into creating features that give more control to the player. That way anyone can customize their own gaming experience and play the game they truly want to play. It currently works with online casino operators from all over, who make up its massive distribution network.