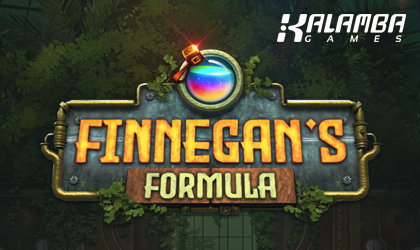 Kalamba Games has launched online slot Finnegan’s Formula. The grid is placed inside a greenhouse that looks like a Leprechaun lab, and there are 5 reels, 4 rows, and 1024 active paylines. The grid can be expanded up to 6 rows, while the number of paylines is increased up to 7776. There is also a Ways Pays system, which means that players can generate a win by placing matching symbols in any position on the reels, starting from the farthest remaining reel. The premium symbols are a four-leaf clover, a hat, beer, smoking pipe, K-cash symbols, while lower-paying are classic royals 10, J, Q, K, and A. The maximum potential win is 6833x the bet. The RTP is 95.95%, while with HyperBonus it goes up to 97.11%.

After their hit with Joker Leprechauns, Kalamba decided to continue with Irish-themed titles! This game has unique features that takes excitement to a higher level!

Alex Cohen, Kalamba COO and Co-Founder said: “Like all the games we create at Kalamba, and the potion Finnegan prepares in his lab, our latest game has just the right blend of fresh gameplay, visuals and features to keep players on the hunt for the precious vials. With a volatility level that’s as high as the in-game columns, Finnegan’s Formula is the perfect recipe for player engagement. It’s a lucky Irish steampunk extravaganza like no other!”

Kalamba Games is a growing game studio with headquarters in Malta, Floriana, and Krakow. The company specializes in developing slots and content for real money games and social casinos. The brand was created in 2016 by two leaders in the world of land-based casinos and the iGaming business, and is ready to build an inspiring company. It is constantly striving to develop innovative titles. The co-founder has worked in various areas of the poker division of Unibet for almost seven years, going from project manager to poker development manager. The other co-founder has extensive experience working with well-known brands. He was Product Manager at Akamon Entertainment and Head of Game Design at Quickspin. The supplier’s most popular games are Dino Odyssey, Gates of Babylon, Goldfire 7s, Blood Moon Express, and more.