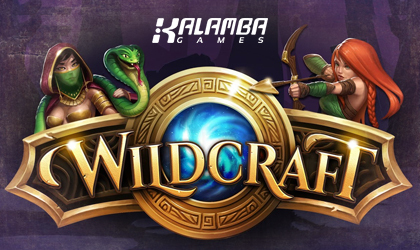 Kalamba Games has spoken to fans of epic tales, elves, orcs, and magic with the release of Wildcraft. The game brings all of the elements…

…a classic fantasy universe often does, in addition to engaging gameplay and interesting features. Players will also enjoy a compelling theme that ties everything together.

The Battle of Good and Evil:

The title from Kalamba is anything but ordinary. That much is apparent from the moment you start the game. The studio responsible for this release wanted to capture the essence of a mysterious universe where orcs and elves are alive and in a fierce battle. The scenery takes place in a dark forest riddled with tombstones of fallen champions and their enemies.

Done in a semi-cartoonish style, this game hits all of the right marks in terms of graphics. With that said, the creators of this realm kept things tame for the most part, with only a few flags being animated beyond the reels. Symbols come in the form of various potions and elixirs as the lower-paying set. On the other hand, the higher paying set of symbols are depicted by various elves and other characters from this slot.

With all that said, immersive graphics are just one side of this coin. The game’s most attractive feature is the unusual reel setup. There are 5 reels but a different number of rows for every other reel. The first reel has the standard 3 rows, while the second has 4, 5th once more has 3 rows and so on.

Those restricted reels feature the Wild Column that has three slots. Once all three slots are full, those reels will be rewarded with a Wild Column.

In addition to this, there is also the classic bonus spin mode most players will be familiar with. As far as volatility goes, players can look forward to a medium to medium-high volatility. Speaking of which, the max anyone can win per spin is 1000 x the original bet.

Alex Cohen, COO and co-founder of Kalamba, said: “WildCraft offers the ideal blend of successful mechanics, compelling visuals and interesting characters to capture player imaginations and attract a long-term audience. The Missions feature takes the excitement of this game to the next level, putting players right at the heart of the action in their quest for big wins and thrilling gaming experience.”

Kalamba Games is a Krakow-based studio with offices in Malta. The company focuses heavily on delivering high-quality titles that go deeper than the usual one-armed bandit title often does.

With constant innovations being introduced to their portfolio, it is constantly on the lookout for a new challenge and a new partner to add to their distribution network. So far, it has gathered a very imposing list of leading operators in this industry.