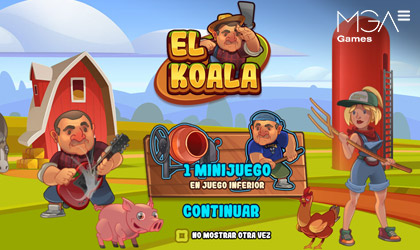 El Koala's debut album sold 40,000 copies and helped him gain recognition as a Malaga-based singer. Shortly after its release, he started working on his next album. His second album was not as successful as his first, but it did help him to establish himself as a Rustic Rock artist. He has released several albums since then and has also toured extensively. In recent years, El Koala has become increasingly popular in Spain, and his music has been featured in many television shows and movies. Now, with the release of MGA Games' latest production featuring El Koala, Spanish fans will have another chance to enjoy his music.

This exciting game features a variety of classic slot symbols on its 3 reels and 3 rows, including bar symbols, lemons, bells, strawberries, plums, guitar, 7s and EL Koala himself. This slot has an RTP of 90%, which is below the industry average, however, this title has medium volatility. Therefore, players can expect more frequent payouts. The maximum jackpot win is 1000x the bet or in money terms $15,000. This game is not expensive or risky to play considering the betting range. The minimum betting option is $0.2, while the maximum bet is $15. This game offers several bonus features including bonus games: concrete mixer, orchard, hen house, and hay pyramid. This title has increased line feature, seven mixed feature and a cumulative game.

MGA is a Spanish online casino based in Barcelona that has been operating since 1976. It began before most people knew the word online gambling. This company also manufactures slots and its content has a high reputation in the iGaming industry. Its online slots are filled with 3D and 2D animations, and bingo games are also available. The company has built a reputation as one of the leading online casino providers in Spain, and in addition to leading positions in international markets in Europe, it is successful. Thanks to its innovative spirit and cutting-edge technology, it has managed to conquer new markets and consolidate its position as one of the top companies in the gaming sector.