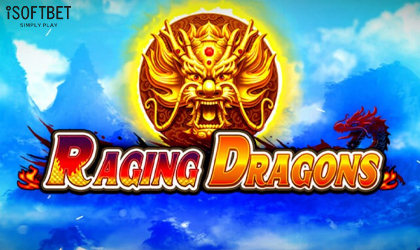 iSoftBet, the award-winning online casino game operator, has launched its latest game, Raging Dragons, to its partners ahead of the game's release on its network. The title has 5 reels, 3 rows and 243 active paylines. The action takes place in a mystical world where Dragons are everywhere around the reels. In the standard game, players should try to get wild multipliers that can appear on reels 2, 3 or 4 and give a multiplier of up to 3x. Any spin can activate the Fortune spin feature, which opens a red lucky envelope that displays a payout of 8x, 88x, 888x or 8888x the bet. This is a high-volatility game packed with an RTP of 96% which is around average comparing to other slots these days.

Runner-up at the BigWinBoard Awards:

At the BigWinBoard Awards, the developer was recently a finalist in the Game of the Year and Provider of the Year categories and was also nominated as a 2020 Game Provider at the Casinogrounds Awards.

iSoftBet’s Michael Probert, Chief Commercial Officer said: “Creating a diverse content portfolio is a key and we’re delighted to add Raging Dragons to our expanding offering. With a huge number of multipliers and the lure of a Fortune Spin, a tussle with the Dragons on the reels can rewards players with immeasurable riches.”

This UK-based company, iSoftBet, has an excellent slots library that includes a wide range of games from various brands, inspired by some of the most iconic movies. Since 2010, the brand has been developing video slots and other classic casino games such as roulette, blackjack, baccarat and many others. Its games have state-of-the-art graphics and bonuses that can be found on many online casino sites worldwide. The company produces a large number of games, which includes more than 50 slot games, which cover a wide range of different themes, meaning that they are suitable for all types of players. Most of their titles are in a five-reel format and all of them are adapted for mobile devices.