iSoftBet Goes on an Adventure in the Book of Sheba 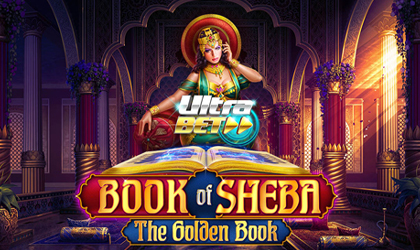 The iGaming market has been treated with a brand-new slot that brings yet another adventure that is taking players back through time. This time around, the destination is an ancient culture with queen Sheba running the show.

iSoftBet’s latest release brings the story of Sheba – an ancient queen that is keeping secrets worth a literal fortune. As Book of Sheba loads up, players are transported to her chambers, in the middle of a massive castle decorated in ways worthy of a queen.

The supplier did a remarkable job setting the scene in this release.

Where most other brands would perhaps create a believable background image, this went with a full-blown masterpiece…

…that is highly detailed and just riddled with subtle animation all over the place. If you look close enough, you’ll notice flower petals slowly falling from the raised pots, or the disturbance in the water pond that covers the lower part of the background. There’s so much detail involved that the game makes you feel like you’re in the palace with the queen herself.

Symbols follow the same idea. Even the lower-paying card royals have received a lot of TLC. The higher-paying symbols feature various golden masks, lions, and more.

At its core, the title is a 5x3 slot game that is utilizing 10 fixed paylines to accumulate winning combinations.

…a true thriller by simply adding several interesting features. There is the Bonus Spin mode triggered when three or more Book symbols are drawn on the reels. Once triggered, players will get 10 bonus spins.

…also an expanding symbol that could appear during this mode. Players can accept or reject the symbol for a chance to get a better one!

The Golden Book feature locks reels into place, turning them into Gold. Last but not least, there is the Ultra Bet feature. The provider allows its players to press a single button and get 50 spins at 50x the original bet.

There are all kinds of bonus features and options in this paid game mode, but it definitely adds to the overall experience!

iSoftBet is one of the leading software providers in the iGaming business. The company is specialized in creating entertainment through immersion and innovation. Their slots often go above and beyond everyone’s expectations, making them a prime partner for operators worldwide. The team that runs the company is keen on offering the best to their clients, both in terms of proprietary content as well as the content found on GAP – their content aggregation platform.