iSoftBet Adds Another Game to the Xtreme Pays Series with Euphoria 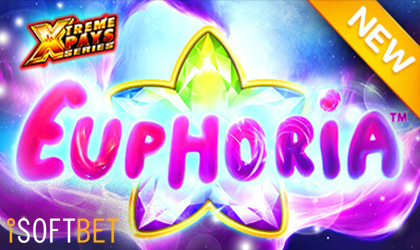 iSoftBet, one of the leading software providers in the iGaming industry, has announced the release of a brand-new game from their Xtreme Pays series.

The new game is titled Euphoria and is packing an awesome theme that is all about Jewels. On top of that, the game also brings several features that could potentially make someone’s day!

The Jewels and Space:

The developer’s latest addition to its growing portfolio represents a title that is all about jewels and space.

The theme makes for a surreal…

…experience that is blowing with colors and awesome scenery. Everything is fairly abstract with the background depicting a nebula somewhere in deep space. The background image is static although there are animations of stars moving towards the player as the reels keep spinning. Add to that the pulsating light effect that accentuates the reels every time a winning spin is played and you have a truly impressive visual experience.

The symbol design is all kinds of shiny. Higher paying symbols are represented by various jewels while the lower-paying set is all about the card royals. However, even those are designed to look exactly like jewels thus being in line with the theme of the game.

This slot runs on a 5x3 reel grid and the 243 ways to win mechanic. Despite having a fairly exciting base game, the developer’s title also comes packing several interesting features.

Namely, there’s the Euphoria spins that can be triggered at any time during the base game. The feature works by having stars landing on the reels that contain various multipliers. Then there’s the bonus spin mode that can yield up to 8 bonus spins. This mode also works with star multipliers that will add to the value of the original bet!

Mark Claxton, Head of Games at iSoftBet, said of the new release: “We are delighted to be expanding our Xtreme Pays Series with the hugely exciting Euphoria. Aimed at generating breathtaking experiences for fans of high-volatile slots, we hope players will appreciate the thrilling ride and high-octane action. The addition of a more volatile series of games to our portfolio has allowed us to reach out to an even wider demographic, something which has been a resounding success for us so far.”

iSoftBet is one of the popular software providers specialized in creating innovative slot games and other content for the iGaming industry. The company is currently certified to operate in several regulated markets including the UK, Belgium, Hungary, Portugal Switzerland, and many others. Aside from their own games, the brand also offers a variety of 3rd party content via GAP platform.