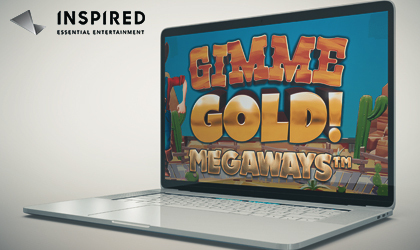 Gold mining was at its peak during the 19th century, but now hobbyists and treasure hunters are trying to uncover the treasures hidden underground. Gimme Gold Megaways gives players the freedom to search for gold from their desktop, tablet, or mobile devices thanks to a leading slot developer, Inspired Gaming. The games take players to the 19th-century American stage, where everything, right down to the sound of the banjo, creates a great environment.

This appealing title teases players to spin the reels and hope for the highest payout of a stunning $250,000 with a bit of help from great bonus features and an unlimited progressive bonus multiplier!

Claire Osborne, VP Interactive, commented: “We’re thrilled to be launching Gimme Gold Megaways. It’s a classic Megaways game that is wonderfully colourful and brimming with cascading wins and mystery symbols. The addition of Fortune Bet, which is available in certain jurisdictions, gives players a chance to speed up access to the bonus round, making this game stand out in the crowd. Gimme Gold Megaways is set to be a mega-hit with fans of Megaways slot games.”

More on the Experienced Provider:

Inspired Gaming was founded in 2001 by Luke Alvarez, and the company became one of the UK's most influential groups in the online gaming industry, initially offering some of the earliest content for mobile gaming. The small business quickly grew to create and supply virtual sports games and video lottery terminals. Today, it is one of the largest operators with decades of experience in the industry and this company is one of the most popular around. It’s been on the iGaming market for a while now and the group developed popular slots such as Reel King Megaways, Anubis Wild Megaways, Desperados Wild Megaways. It has developed over 100 online slots and each one has quality graphics and an amusing soundtrack.