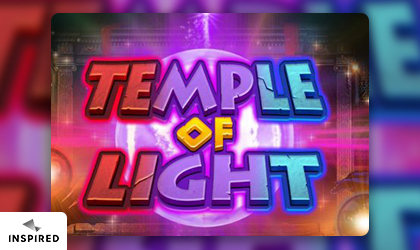 Inspired Entertainment, an online casino provider, goes live with the Temple of Light slot which is a traditional 5-reel, 3-row title with an adventuristic theme. The game is compatible for play on mobile and desktop devices and visually, red or blue lasers are all over the reels. Without these effects, the game would look typical and these graphics look great. Lucky players will get up to 2,000x wins during the main game with a combination of 2 features, and only in the bonus rounds maximum potential win of 5,000x the bet is available and an RTP of 95.51% is slightly under the average.

Taking advantage of the secret and ancient quests, the title has 20 active paylines that are ready to enlighten players with its vibrant graphics and immersive soundtrack in their mission to catch the big wins. The base game includes two ancient statues, one of which can be triggered randomly on any turn. The statue on the left creates multiplier symbols, while the statue on the right creates expanding wild symbols, and both light up when they are triggered, which adds excitement during the game. At least 3 bonus symbols start a bonus round in which the players can pick a bonus according to their needs, 12 standard extra spins, or 3-6 super spins.

Claire Osborne, Inspired VP Interactive said: “With its vivid and eye-catching graphics and adventure-themed imagery, Temple of Light and its player choice bonus round will thrill players while the base game with its random multipliers and expanding wilds will keep players invigorated and highly entertained throughout. It makes a fantastic addition to our growing portfolio of highly engaging games content.”

Inspired Gaming is an online casino game provider and one of the largest multi-game VLT providers. With over fifteen years of experience in the iGaming industry and over 34,000 slots available in regulated markets, the slot manufacturer is certainly a notable force in the industry. It has been on the iGaming market for some time now, and has over 90 online reel games, all of which are equipped with stunning high-quality graphics. It uses the latest technologies available which also demonstrate high compatibility with mobile devices, which is a key feature today. The company has received several awards in recent years. For example, Inspired Gaming won the 2019 Global Gaming Award in Las Vegas.