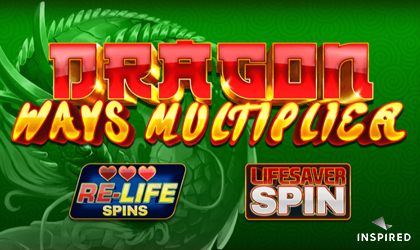 Inspired Entertainment has announced the release of a brand-new game titled Dragon Ways Multiplier. The team behind this release has found the perfect balance between rocking theme and a set of features that will satisfy even the most demanding players out there.

The software provider with offices in London and elsewhere in the UK, is behind the latest slot game that carries the traditional Chinese theme. The new game is all about bringing the Asian culture closer to players through fun and potentially massive wins. Aesthetically, the game offers an immersive theme with plenty of highly detailed design features.

Symbols perfectly match the theme with their stylish looks and vivid colors. Players who are fans of this genre will feel right at home.

With that said, this game…

…doesn’t have that issue where it looks exactly like every other slot inspired by the traditional Chinese or Asian culture.

As far as features go, the game is all about its features. It comes with exciting bonus rounds as well as Re-Life Spins.

This is an innovative bonus spin mode with unlimited spins as…

…well as increasing multipliers and occasional stacked wilds. On top of that, players who trigger the Re-Life Spins feature are guaranteed a win multiplier of up to x5.

The Re-Life Spins mode awards players with 3 lives. Every winning spin resets the lives to three while the multiplier increases to the next level. Overall, there’s a great potential for numerous bonus spins while players could potentially reach x100 multiplier.

Steve Collett, Inspired’s Chief Product Officer, shared his opinion: “Dragon Ways Multiplier is one of my favorite titles Inspired has made and I couldn’t be more proud of the team who created it. It’s an exciting game to play, with the combination of the Re-Life Spins bonus and climbing multiplier, and the addition of the life-saver spin is just the icing on the cake. We are so excited to see it live, and already have sequels lined up. Dragon Ways Multiplier has a unique concept with regular access to the bonus round giving players a recurring taste of the possible riches…. We expect it to have popularity worldwide,” said Claire Osborne, Inspired’s Vice President of Interactive.

Inspired is an established software provider that operates in 35 jurisdictions worldwide. The company is specialized in creating virtual ports, leisure products, and gaming content for its massive distribution network of clients. As of right now, its games can be found on over 50,000 gaming machines throughout the world while their online games are found at 100+ online operators.