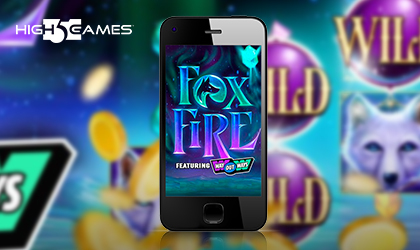 High 5 Games (H5G), one of the leading software providers from the North American continent, has announced that it has released a brand-new slot game titled Fox Fire.

Aside from showcasing an awesome theme, H5G will also be introducing its latest game feature called Way Out Ways.

The developer has a knack for building breathtaking games capable of teleporting the player to various exotic destinations. That definitely applies to its latest release. The game takes place up in the far north – the aurora borealis country.

As a matter of fact…

…the whole game’s aesthetic is centered around the neon lights in the night sky. The background is static for the most part, but highly immersive. It depicts a frozen landscape that is illuminated by the aurora borealis far in the distance.

Up close, there’s a friendly fox just sitting next to the reels and enjoying the view. Symbols fit the overall theme and depict various gems, fox heads, and more.

The new release is a 7x5 reel game that runs on 729 to 117649 ways to win. The whole slot revolves around the Way Out Ways – a base game mechanic that allows players to unlock more rows per reel and hence improve their chances for a win.

Phil Welty, Head of Game Design at High 5, offered his take on the new title: “We’re very excited that with the release of FoxFire we can finally show off the next in our series of highly innovative slot games! The Way Out Ways feature is designed to take traditional ways gameplay and allow it to build upon itself to immense heights over successive play. Our goal is to provide a game where players will be able to experience the potential for truly massive wins in a manner that is fresh, exciting, and highly intuitive. Combined with an audiovisual package that is at once visually striking and soothing, we’ve created a gambling experience that we believe will be a winner with slot players all across the world.”

High 5 is one of the leading software providers in the iGaming industry. Headquartered in New York, it has established a firm presence in over 150 countries around the world. The company was founded in 1995 by a group of industry professionals who are passionate about iGaming as a whole. Since then, it has grown to a point where it operates its own casino as well as a content aggregation platform.

Despite all that, the company is still working on producing new and exciting slot games for their fans and clients.