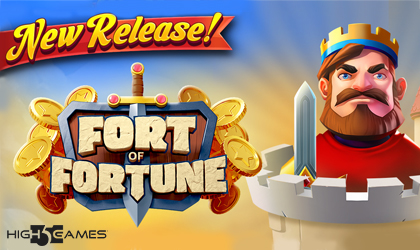 Leading online casino game provider, High 5 Games, has unveiled the hottest addition to its Spin-crease slots and introduced a new feature in the Fort of Fortune video slot. The 5-reel, 3-row title with 20 active paylines is equipped with features such as Tumbling Reels, as Double, Triple and Quadruple split symbols, which increases the chances of getting more symbols on the payline.

This is a high-volatility game with an RTP that can go up to 97%, which is high above the industry average. Wager-wise players can bet from $0.2 up to $60, while the maximum potential win is 5712x the bet. These features mixed with stunning graphics and intriguing adventure, will attract the attention of most of the punters. The new release has been live since January 5th.

Jerry Wilson, VP of Creative at High 5, said: “Branching out with this whimsical art style, we sought to create a world of mystic kingdoms and dragons, with a light-hearted take on a kingdom under siege by this mythical beast.”

Phil Welty, Head of Game Design, added: “Fort of Fortune takes the Spin-crease feature to the next level. As players play the game they unlock increasingly valuable split symbols, progressing from double to triple and eventually quadruple symbols! Just as in past Spin-crease games, the player’s progress is permanent, helping to drive long term engagement, but this version of the feature offers greater symbols to unlock than any we’ve previously released. We believe this game has the potential to develop an even larger and more dedicated fanbase than our previous Spin-crease hit, Triple Double Da Vinci Diamonds.”

High 5 Games is a New Jersey-based casino provider of slots established in 1995. They has over 20 HTML5 slot games and altogether over 200 games. Notable titles from this brand are A Night of Mystery with 9, Golden Knight and Way Out Wilds. The games provided by this casino operator are available on Facebook and Carnival Cruise Lines for free. In 2010, it won an award for the IGT Online Game of the Year award for its Noah's Ark slot. It received the Best New Game in North America award for games released in 2015 and 2016.