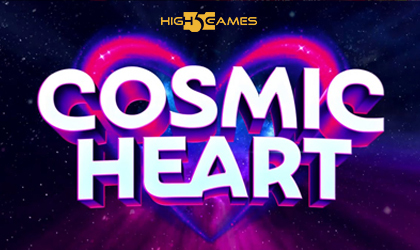 The stars are creating a cosmos of prizes in the latest release from New Jersey provider, High 5 Games. Players can use the new prize line feature to move around space until they achieve their space victory.

The latest release from the company brings together a wide range of game themes; this journey into the outside world is filled with many functions. In the new Space-themed slot, players will encounter a space adventure to activate various ways to win.

This is a 5x5 grid slot packed with an RTP of 96% and at the beginning of each bet, the symbols on the prize line rotate to the left and circle the prizes. When the Cosmic Heart symbol appears on the reels, the prize line symbol above the Cosmic Heart is activated, increasing the odds of receiving a prize. The Prize Line offers the ability to earn multipliers, extra credits, bonuses and wild symbols.

“We’ve designed Cosmic Heart to be a game that takes player anticipation to new heights. The Prize Line above the reels displays a large rotating assortment of exciting features, which can each be won by landing a heart symbol on the corresponding reel. These features persist for multiple spins and can scale up to huge potential values, putting the prospect of winning big front and center for the player for extended periods of time. We’re very excited for players to finally get the chance to experience all of the variety and excitement we’ve packed into this game!”

High 5 is land-based casino software and slot creator from New Jersey, founded in 1995. It has over twenty HTML5 slots and over 200 games. Famous games from this brand include A Night of Mystery with 9, Golden Knight, and Way Out Wilds slot.

Titles that come from this gaming provider are being presented on Facebook and Carnival Cruise Lines as free offers. In 2010, the company won the IGT Online Game of the Year award for its Noah's Ark slot. Recently, it won the award for the Best New Game in North America award for games released in 2015 and 2016. The American Gaming Association also awarded the brand for Best Communication Website of the year.