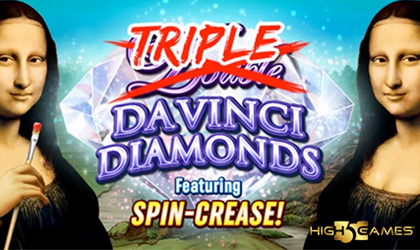 High 5 Games (H5G) has launched another installment in its popular Da Vinci Diamonds series of slot games. The latest of the bunch is titled Triple Double Da Vinci Diamonds and brings a number of interesting features.

Players will now have the Spin-Crease feature at their disposal, allowing them some control over the gameplay.

H5G, a New York-based software developer with a history of delivering quality titles, has pushed the Da Vinci Diamonds series to a whole new level. The latest slot offers a truly artistic experience to fans of the series as well as fans of Leonardo Da Vinci’s artwork.

The game’s theme is heavily focused on this famous artist’s paintings. So much so, that even the background is designed to reflect his unique style.

The team behind this title’s visual side went to great lengths to fuse the classical painting aesthetics with a modern slot environment.

The looks are not the only thing that sets this game apart from its predecessors, Double Da Vinci, as well as many other slots on the market.

H5G has chosen a fairly standard 5x3 grid that runs on 40 fixed paylines for this build. The studio has also included a number of special features. By far, the most important one is the Spin-crease. Once triggered, this feature allows players to upgrade certain symbols into higher-value ones, thus increasing the worth of a potential win.

Next, there are the Tumbling Reels that uncover the winning gems, Split Symbol feature that counts a part of a symbol towards a win and Triple Symbols.

Anthony Singer, CEO and Founder of H5G, said: “Our series of games inspired by the artwork of Leonardo Da Vinci has proven to be a major hit with operators and the inclusion of the Spin-crease feature is set to add another layer of excitement to the gameplay.”

“This highly effective gamification tool allows players to unlock new, more valuable symbols across sessions, with bedazzling wins up for grabs during the state-of-the-art gameplay. Along with Tumbling Reels and Split And Triple Symbols, we’re sure that Triple Double Da Vinci Diamonds will become one of our most successful releases.”

High 5 is a veteran software provider from New York that has been supplying the market with high-end slots. The company was founded in 1995 and has since grown into a proper authority in the industry. The company currently holds licenses in most important markets, has a presence in 50 countries and offers a portfolio of 300+ games to their partners.

The supplier has also been recognized numerous times for its innovative features. It holds a number of EGR NA awards.

Thanks to a dedicated team of talented professionals, H5G is experiencing sustained expansion with new partners and clients being added to their portfolio.