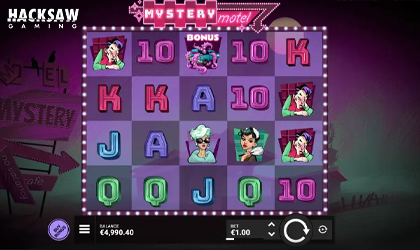 Mystery Motel is a 5-reel, 3-row and 1024 active payline video slot delivered by Hacksaw Gaming. Animations and graphics look great and vibrant symbols add a touch of life to the game with audio effects that capture the magical vibrations.

When the word is about the soundtrack, after the release of The Respinners, the provider became an expert in delivering quality sound to the slots and the soundtrack for this one follows that path. During the base game, the track sounds calm with a bit of a mysterious touch, but when things get hotter, it speeds up and gets more intense.

The game is adaptable for any device, either desktop or mobile and players have a pretty nice betting range which starts from $0.2 up to $100 per spin. This is a medium-high volatility-game with an RTP of 96.30% and it can also be increased up to 97.62% during bonus rounds, which is above average. Payouts should happen frequently based on a 30.75% success rate and the maximum payout stands at 10000x the bet. There are 9 regular symbols where A-10 royals are paying less and 4 interesting visually and high-paying characters include a housekeeper, butcher knife, sleeping manager, and a beautiful lady.

Hacksaw is a new online casino developer and a very successful content developer. The brand first appeared during the development phase of online casino games in September 2018. Since its beginnings, it has partnered with several other online casino content designers and online casino operators such as Wildz Casino, iSoftBet and many other big industry names. The main business goal of this relatively young company is to restore interest in scratch cards and other traditional casino games. The brand has already released over 30 scratch card games that attracted players at different online casino operators around the world. The brand also offers an outstanding collection of titles that generate big payouts thanks to the included bonus features.

While this operator has entered the online casino gaming scene with the main goal of reimagining classic casino gaming products, but they are using the latest technology features, cutting-edge tools and services to bring more fun to online casino games for everyone who tries their products.