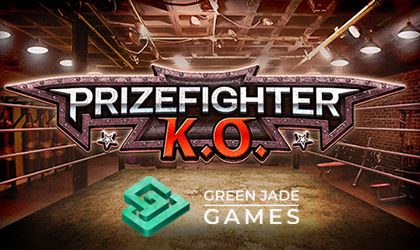 An online casino provider, Green Jade Games, invites players to step into the boxing ring and compete for big wins in its revolutionary online slot called Prizefighter K.O. This game is obviously designed to attract martial arts fans and they will see appropriately themed symbols across the reels.

Heating Up the Ring with Exciting Features:

The action takes place in the boxing ring where there are 6 reels, 4 rows, and 50 active paylines. The RTP is 96.15%, which is above the industry average. The game promises a jackpot of 1250x the bet while the betting range is wide and goes between $0.5 up to a maximum bet of $500. As for the special features, players can purchase the bonus, and there is an automatic knockout feature, extra spins, and a win feature where every extra spin guarantees a win.

Introducing Players with a Successful Mechanic:

Green Jade Games delivers with this title an attractive math model and plenty of bonus features that help players to generate big wins. The game is user friendly and available on desktop, tablet, and mobile devices.

Chief Commercial Officer at Green Jade Games, Mark Taffler, said: “We are thrilled to debut EverWin in the one of the most hotly anticipated bouts in slot-launch history, Prizefighter K.O. No other mechanic delivers guaranteed wins that have the potential increase with every spin, something we believe is a real game changer. This, combined with our hugely successful K.O. mechanic and the option to Buy the Bonus, helps players box clever as they look to fight their way to victory and secure some potentially big wins during the bout.”

Green Jade Games is part of the MRG group and the history of this company started more than a decade ago, in 2007. It increased its portfolio of games quickly in 2008 with the launch of the online casino Mr Green. The provider was founded in Malta and it is dedicated to a level of fun that is closely linked to its success. The Malta-based company is run by Benedict McDonagh and Jesper Karrbrink, both of whom have years of experience in the iGaming industry. They managed to gather a talented team of developers and designers to launch the brand’s first Hammer of Fortune slot machine, and it took them a whole year to publish this title. After breaking the ice, it delivered the second Finding Mr Green and more popular titles such as Fortune Stones. The company has launched around 30 casino titles.