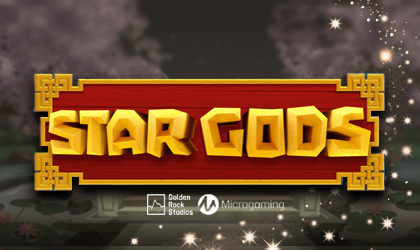 Microgaming, a premier software provider for the iGaming industry, has announced the release of a brand-new game designed by Golden Rock Studios. Titled Star Gods, the new game…

…offers interesting features and a theme that is promising a more immersive experience.

Good Fortune for All:

This latest slot displays a proper Asian themed experience packed with interesting features. The game shares the aesthetics that may be associated when they imagine a title from this genre. Fans of the Asian-inspired slots will feel at home but also appreciate the cartoonish style it offers. With that said, this is still unmistakably a solid release that will hold its ground…

…among the other similarly themed slots in Microgaming’s portfolio.

Tame Base Game with Interesting Features:

At the core of this release, we see a 5x3 reel grid that runs on 10 fixed paylines. This reveals that the title is a rather tame slot. Even so, players can potentially win a max total of x600 the original bet during the base game alone.

…that is triggered when a combo of scatter and wild symbols drop on the reels. Players who love bonus spin modes can potentially look forward to a max of 200 bonus spins.

Will Mathieson, CPO at Golden Rock, said: “In keeping with Golden Rock’s strategy of rewarding players and providing winning experiences, we are excited to announce our new game Star Gods. With simple mechanics and easy to understand 10 pay lines this unique game has frequent wins and features and rewards players beyond their expectations with guaranteed win spins and up to 200 re-triggers. The Golden Rock team has really nailed to look of the game, which is bold and striking, while the math and mechanics deliver a thrilling and exciting experience with a game full of surprise and delight. We believe Star Gods will be a big hit with operators and players in core online casino markets around the world.”

James Buchanan, director of global operations at Microgaming, said: “Star Gods is the second game from Golden Rock Studios now available through Microgaming’s award-winning aggregation platform. The five-reel, ten-payline slot delivers an entertaining gameplay experience and is sure to be a hit with players. Golden Rock Studios has a busy year ahead with a range of fresh and diverse games, including RouletteX2, scheduled to be released exclusively across Microgaming’s entire customer base. We look forward to seeing their upcoming creations.”

As of today, it is running a massive team of professionals spread out between several countries around the world. The company’s current portfolio is packed with awesome titles designed in-house, as well as those created exclusively for it by 3rd party providers.