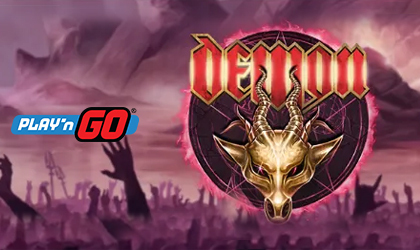 Play’n GO is continuing its series of music-related signature games with the release of the Demon slot. Named after a legendary UK metal band of the…

…same name, Demon brings a number of interesting features to the table. Fans of the band can look forward to more than just a thrilling slot experience!

Your Own, Personal Rock Show:

Play’n GO has a strong tradition of creating slots created in cooperation with big names from the world of music. Demon, a ‘70s heavy metal band from the UK, is just the latest name to be added to this list.

The band is regarded as a pioneer of the UK heavy metal scene along with Motorhead and other bands of the era.

The decision to cooperate with the developer on a signature slot has given this legendary band an opportunity to release an exclusive song fans will only be able to hear in the Slot. Titled Devil Rides Out, the new track is just one of several that appear in the game.

However, that is not the end of surprises for fans of the band. It has announced that they will be releasing a brand-new album that is inspired by the title.

Considering the success of the developer’s previous releases made in cooperation with Sabaton, the company is looking forward to similar results with this title. As far as the game itself goes, it brings stunning graphics, a very distinctive theme riddled with dark and exciting elements, and a smooth base game mechanic. This is a 5x3 grid slot that runs on 30 paylines and features up to 16x multipliers.

Martin Zettergren, the developer’s COO, shared a comment regarding the creative process behind this title: “The thing that sets Demon and our other music slots apart from others is the fact that the bands are part of the creative process so, not only do we bring our usual levels of creativity and entertainment to each slot, but we really capture the spirit of the band, giving it that something extra. Demon is another great release for us as we move into the final stretch of this year, ensuring that we finish this year with the consistency and strength we’ve shown across 2019.”

Play’n GO is a company that specializes in creating and producing high-end slot games for the iGaming industry. Founded in 2005, this provider has been slowly focusing more and more on mobile games. As of right now, they offer a massive portfolio of titles and specialized content management solutions.

With a presence in numerous countries around the world, it has managed to establish a solid presence is some of the most competitive markets in the iGaming industry. Their result-driven business practices have allowed them to grow their distribution network and become one of the authorities when it comes to iGaming content in general.