Get Ready for Some Action in Ninja Ways from Red Tiger 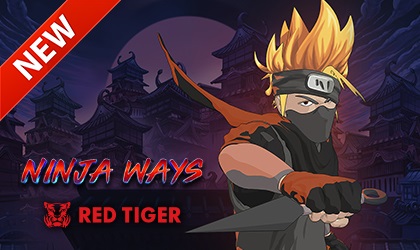 The countdown is on to the next video slot release from 2014-founded developer, Red Tiger Gaming, and it’s one that is set to be a hit, with a staggering 4096 ways to win, promised in every spin!

Ninja Ways is due to be released on 11th October 2018 and it features ninjas, who are waiting to kick ass and award players with wins of up to 10,000x their stake…

…The game promises to engage with a medium level of volatility and a high hit rate. Keep your eyes on that stealthy Ninja because he can leap across the reels and when this happens, big rewards are sure to follow.

Accessible on desktop, mobile and tablet devices, players can enjoy animated martial arts in the eerie streets of Asia. Each of the 6 reels is four symbols high, which gives a maximum of 4096 win lines. Symbols on the reels range from card values to blades and swords: just think back to the retro Street Fighter game (minus the outdated graphics) and you’ll be close enough to the style of symbols in play.

Will you be giving it a try?

Play Now and Enter the World of Carol Baskin