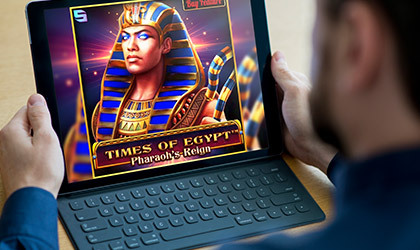 Spinomenal's Egyptian-inspired slot game will make you feel like an ancient explorer uncovering a long-forgotten treasure. Following the success of the previous release Times of Egypt, the reels are set against the backdrop of the Nile River in Africa, and the symbols are a mix of classic royals and special symbols. Besides the 5x3 reel design, this title has an absorbing soundtrack that builds up the atmosphere. The game offers a wide range of betting options, so you can tailor your experience to your budget. And if you're lucky enough to hit a winning combination, you could be in for some serious golden riches! So try your hand at Spinomenal's Egyptian-inspired slot and you might just uncover some hidden treasure!

Players will love the smooth gameplay, stylish designs, and exciting soundtrack that helps bring it all together. The game transports players back in time to Ancient Egypt, where they must help the Pharaoh build a glorious empire. With challenging missions and exciting features, Times of Egypt Pharaoh’s Reign is sure to bring luck to many players out there!

Spinomenal’s CTO, Omer Henya, said: “Times of Egypt – Pharaoh’s Reign is a terrific addition to our ever-growing games catalog. Players will love the slick game-play, stylish designs, and immersive soundtrack that helps bring it all together.”

More on the Gaming Studio:

Spinomenal Studio is an online software casino developer that was founded by Lior Shvartz and Omer Henya in 2014. With the objective of developing high-quality, attractive, and easy-to-play online casino games across multiple platforms, the brand was established. Its games are available on many platforms, including desktop, mobile, and web. The company has developed more than 300 premium online slots, including popular releases such as Greedy Servants, Power Pups Heroes, Gangster’s Gold, Zombie Slot, Biker Gang, and more. The company's goals are focused on providing an excellent gaming experience for all types of players, whether they're seasoned veterans or first-time newcomers. With a team of experienced professionals, it is committed to continuing its growth and becoming one of the leading online casino game developers in the industry. The supplier’s software is used by some of the world's largest online casinos, such as LeoVegas and Betsson.