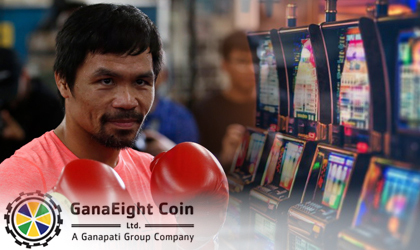 Manny Pacquiao, one of the world’s finest boxing legends, is getting a slot game of his own. Ganapati has announced the release of this new title sometime in September of this year.

As expected, the game will have a fighting theme, which is something Pacquiao is obviously passionate about. However, there is much more to this release than meets the eye.

Champion of the People:

While he was one of the greatest boxers to ever step into the ring, the boxing legend is also known as a champion of the people. His philanthropic work almost precedes his sports career. Pacquiao has donated a good portion of his winnings to a number of Philippine charities in the past. With that said, it comes as no surprise that proceeds from this new slot will also go to the ‘Manny Pacquiao Foundation,’ which supports children’s education in the Philippines.

One of the somewhat controversial aspects of this release has to do with his current political career. However, his reputation and the fact that the game will directly fund children’s education has silenced even the strongest critics.

The studio that gave us games like Shiba Inu isn’t hiding their excitement with the new game.

Juliet Adelstein, the CEO of Ganapati Europe Holding as well as Ganapati Malta offered a statement regarding the new release: “This opportunity is extremely exciting for us as it represents Ganapati’s considerable growth within the industry. We’re delighted to be involved in this project with the octuple champion Manny Pacquiao – a true global superstar. It is wonderful to know the extent to which Ganapati is now being recognised in the industry.”

She was joined by Hayato Terai, CLO of Ganapati PLC and Ganapati Malta with a statement of his own: “Manny Pacquiao has defeated countless powerful players in the past – no matter how strong his opponent, he always faces them head on and without fear. This mental strength of his can be seen not only in his role as a pro-boxer, but also as a politician and future leader of the Philippines. Manny Pacquiao is the most successful and respected athlete in Asia and an incredibly skilled and determined politician. It is an honour to be able to produce his official game.”

The game should be released sometime in September and will be available in all partnered online casinos.

Ganapati is a large international company that is producing some of the best iGaming titles for the industry. They are comprised of different design studios, production companies, and other relevant entities all of which work together in creating cutting edge content.

The company is present in numerous locations around the world. With offices in Tokyo, London, Los Angeles, Taiwan, Malta, Estonia, and Curacao, they are by far one of the largest international players in the game. Despite that, it is always looking to expand its reach and establish a presence in newly-regulated markets. With a talented and dedicated international team, this company is promising to increase its market share in the near future.