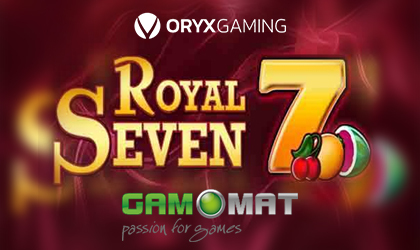 Gamomat is planning on releasing two slot game titles within the next week. One of them is titled, Royal Seven. The new game brings a lot of that…

…classic slot feel in a simple yet functional package. The game will be released on Oryx Gaming’s content aggregation platform as an exclusive.

The new title is the latest in a string of releases from Gamomat and Oryx Gaming. This software studio has been releasing simple, classic-looking slots that bring that old-school vibe to a market saturated with all kinds of complex slot games.

This offering is the complete opposite – the antidote to overwhelmingly complicated aesthetics. This slot features a straightforward theme that incorporates a dark red background and simple, almost cartoonish, Fruit symbols. The throwback to classic slots doesn’t end there either. No part of the theme is animated. The background is a solid dark-red image disturbed only by a few lighter colored shapes that cross the screen.

With that said, the reels and what happens on them commands the player’s attention as there is not much on there to serve as a distraction.

As expected, the symbols used for this game come in the form of various Fruits. The only one that stands out is the Royal Seven, which is also the highest-paying symbol you can get on the reels.

Gamomat has compensated for the lack of visuals with a solid base game and interesting special features that give the whole experience some depth.

The core game features a simplified version of the standard 5x3 grid that runs on 20 paylines. There are no wilds or scatters. The main game has an estimated RTP of 96.11% while the mini-game called Hot Firepot holds an RTP of 96.05%.

A Duo of Features:

Speaking of Hot Firepot, this is one of the two special features. Triggered randomly, this feature can ultimately lead to a side game jackpot. Players will have to fill out the thermometer in order to reach the big win.

The other special feature is the Ladder/Card gamble. Once players score a winning combination, they have the option of gambling their winnings in these two side games.

Ladder Gamble advances players up a value ladder every time they win. On the other hand, Card Gamble is a much more straightforward game. It’s a variation of a coin toss feature only using black and red cards instead of the usual head or tails mechanic.

The software provider supplies the iGaming industry with various content, including slot games, live betting, sportsbook, lottery, and other services. This company also runs one of the largest content aggregation platforms on the market. With over 8,000 titles in their offer and a number of 3rd party software developers working exclusively for them, this company’s content aggregation platform has become a trusted source of entertainment for numerous users from all over the world.