GAMOMAT Releases the Book of Romeo and Juliet Slot 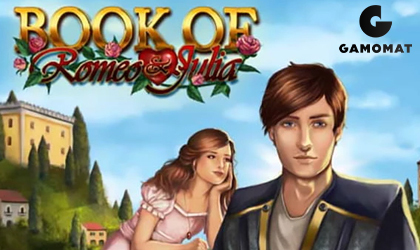 GAMOMAT has announced the release of Book of Romeo and Juliet; it’s the latest slot game to be added to this company’s portfolio.

The team behind the brand has…

…decided to bring back the iconic Love Story, with a spin of their own. Packed with great features and an awesome theme, the new game promises a fun experience.

The developer’s latest title is all about the tragic love of two youngsters. However, the team behind this game didn’t spin the game in such a dark direction.

Instead, they’ve made a…

…slot that is all about potentially winning big and having fun. The theme is definitely among the better this year. The supplier invested a lot of effort into creating an immersive environment that works well for the story as well as the features offered.

The scene players will find when the game loads up places them in the middle of the medieval Italian countryside. Green is the dominant color with plenty of hills and houses on top of each. The reel design is simple.

The provider went with…

…a dark background, which offers plenty of contrast to the symbols. Speaking of which, there are two tiers of symbols. Players will see the card royals in the lower-paying tier, while the higher paying tier includes letters, daggers, as well as our two love birds.

It’s worth mentioning that the theme changes depending on the features that are active at any given time. One of the scenes offered is the skyline of the city at night.

As far as features go, this 5x3 game is packed with them. The main feature has got to be the Golden Nights Bonus. Once triggered, players are presented with three chests.

If all three chests are packed with Gold, players are…

…forwarded to the Golden Nights draw where they can collect point and potentially win massive jackpots.

There are several tiers of jackpots with the Super Jewel being the top one.

Aside from this, there is also the bonus spin mode with 10 bonus spins…

…awarded to players who collect 3 to 5 scatters. Overall, the game brings plenty of potential when it comes to scoring big wins.

GAMOMAT is one of the leading software providers specialized in building highly immersive slot games for the iGaming market. The company currently works with several top-tier casino operators from all over the world, bringing quality gaming solutions to players in key regulated markets. The team behind the brand consists of driven, highly skilled professionals who are masters of their work.