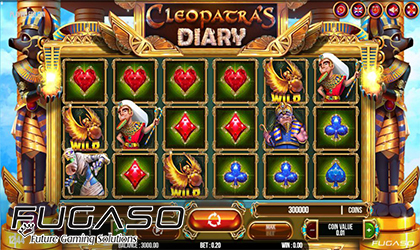 Fugaso has released a new slot game titled, Cleopatra’s Diary. The game brings a combination of interesting graphics and an engaging base game…

…mechanics that promise to keep players engaged and entertained.

A Different Take on Ancient Egypt:

Fugaso’s latest game is another slot set in Ancient Egypt. However, this particular offering features a different take on this rather popular theme. The team behind this release went with semi cartoonish visuals. However, that doesn’t mean the game’s graphics are basic. On the contrary, it features high-end graphics…

…with plenty of animated and otherwise interesting details.

The background features a temple of sorts with two massive statues of Anubis on each side of the frame. There is a substantial amount of gold used, which gives the whole game…

…a very unique aesthetic vibe. The developer has gone so far to animate the clouds in the far background as well as the statues themselves. On top of that, most golden surfaces feature an animated reflection from time to time.

Aesthetically, the supplier has put together a proper treat for fans of this common theme as well as those who appreciate a good looking slot– period.

Base Mechanic and Special Features:

At the core of this title hides an interesting base mechanic that is rooted in a 6x3 frame with 20 fixed paylines. It features standard card suits for the lower-paying deck, while the higher paying deck of symbols features different pharaohs, mummies and other…

…imagery that is oftentimes related to this epoch of Egypt’s history.

The base game itself has a few special features attached to it. Players will run into sticky wilds, bonus re-spins where players get 10 extra spins, frozen mummy sticky wilds, and more.

Even though there are no unique mini-games involved, there is a great set of features that make the game that much more fun to play.

Speaking of gameplay in general, this is a medium volatility title with an estimated RTP of 96%. Check out for this title to go live shortly on all affiliated online casinos.

Fugaso is one of the leading software providers in the iGaming industry. The company is known for delivering high-quality games that put an emphasis on high-intensity graphics. Aside from that, it is looking to improve their presence in the realm of mobile games but also network games.

As a team, it is adamant about improving responsible gaming across the markets where they operate. In that regard, they provide players with tools and means necessary for them to track their gambling habits, spending, and other metrics.

With a highly motivated staff consisting of people driven by their work, the supplier is all about providing the best possible experience to their clients as well as end-users. That approach has netted them a large number of partners in numerous regulated markets around the world. It currently holds the UK Gambling Commission’s Remote Technical Standards license.