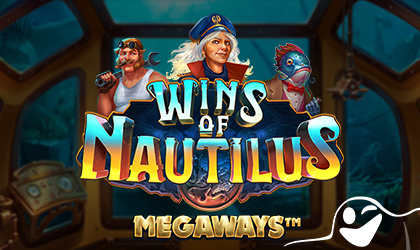 The movie from 1954, 20,000 Leagues Under the Sea, is one of those classic movies that remain in memory forever. Fantasma Games was inspired by this film and launched the online slot Wins of Nautilus Megaways based on the legendary submarine.

This game is played on 6 reels, 7 rows, and 117649 active paylines. The minimum betting option is $0.2, while the maximum is $20. Lucky punters can hope for a maximum potential win of 10,000x the bet or $250,000. The game’s best odds are 96.10%, however, with the bonus buy feature, the RTP goes up to 97%. As for other bonus features, there is an exciting avalanche mechanic, countdown bombs, multipliers, a re-spin feature, scatters, and extra spins.

Wins of Nautilus Megaways is another exciting online slot that will significantly increase player interaction and boost excitement with original bonus features!

Fantasma Games’, Tianzhi Zhou, said: “Wins of Nautilus Megaways takes players to an underwater world packed with adventure and big win potential. We have taken the legendary work of Jules Verne and put our own twist on it to create a game that visually is like no other – it is truly striking.”

Fantasma Games, Swedish casino provider, was founded in 2016 by experienced individuals from successful casinos such as LeoVegas, ComeOn and Grin Casin. The company offers casino content through Microgaming and it already has partnerships with major casino providers like Yggdrasil and Leander. This provider is committed to developing the latest and most popular casino solutions, and its games are licensed to use Big Time Gaming engine mechanics. Therefore, it developed games like Hypernova Megaways and Flower Fortune Megaways. It released its first game in 2017 and has developed 19 games since then. The brand is a relatively young company in the iGaming industry and is experimenting a lot with 3D slots and testing virtual reality.