Experience the Rush in 777 Heist by Red Rake Gaming 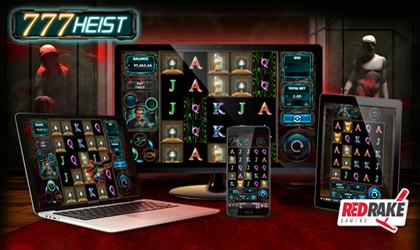 Red Rake Gaming, one of the premier software providers in the iGaming industry, has announced the release of their latest slot titled 777 Heist .

Embark on a daring raid and get away with a potentially valuable loot! The game brings numerous interesting features as well as a compelling theme.

The Thrill of the Heist:

The latest title puts players in the middle of a job that can potentially bring a massive payout. If you’ve ever wondered what it would be like to hit a bank and get away with a big chunk of cash, now is your chance. The team behind this release has done everything to make this adventure as believable as possible.

Once the gamer loads up, players will find themselves in a…

…dark lobby of a vault, surrounded by statues. To set the mood, the team has added a bunch of lasers that sweep the room in search of intruders. With that said, the symbol design is pretty interesting as well.

The team went with a combination of simple card royals for the lower-paying tier. The higher paying tier of symbols includes invaluable statues, gems, paintings and more!

To finish the whole thing off, there is a soundtrack that adds a layer of suspense!

The game is based on the 5x5 grid with cascading reels. That alone makes it quite interesting compared to the usual slot format. However, the developer has taken this adventure one step further! The company has added several special features starting with the Special Spin mode.

In this mode, players get to use 3 different skills in order to score more wins. There’s the hacking mode where symbols are replaced by other symbols to score wins, the harness mode where two wilds are placed on the reels by a suspended thief, and the smoke bomb skill that clears up the reels! All of these three skills lead up to the Mona Lisa painting behind the reels.

There is also the Artworks feature where players get to collect artworks and score potentially massive rewards. The new release will be made available through its network of affiliated online casinos.

The Developer in Detail:

Red Rake is a software provider that specializes in high end slots. The company was founded in 2011 and has started its journey within the iGaming industry on the social side. However, in 2015, its team decided to cross over into the real money world of iGaming and start creating games for various B2B operators. As of right now, it is one of the leading brands in the business.

The company offers a massive portfolio of high-quality games that are supported by a complex set of back office tools.