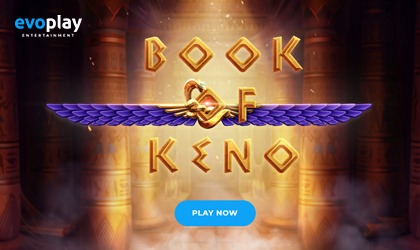 Innovative game development studio Evoplay Entertainment has updated its fan favourite with its latest hot release, Book of Keno. Giving an electrifying twist to a nostalgic classic called Keno, punters are invited to choose one of ten numbers displayed in the mysterious Keno Book, with rewards for every victorious match.

The title integrates a series of addicting games from a leading provider, including the hugely popular Forest Dreams and Racoon Tales and the recent release Jolly Treasures.

The action takes place on a 6x6 grid with a maximum potential win of 10000x the bet. Wager-wise punters can bet from $0.1 up to $100 the bet. Volatility is still unknown and the RTP of 97.01% is above the average and punters will surely pay attention to this one.

Commenting on the launch, Ivan Kravchuk, CEO at Evoplay said:

“We’ve created an enthralling new version of the beloved classic Keno in our latest immersive release, Book of Keno. Taking the fan favourite to a whole new level with stunning animations and an intriguing theme, we can’t wait to introduce it to players. A stellar addition to Evoplay Entertainment’s diverse portfolio, the title features our Spinential game engine, which is designed to elevate the player experience with accelerated loading and download speeds as well as innovatively enhanced gameplay.”

Evoplay is a relatively unknown company despite having operated in the casino gaming arena since 2003. This is likely due to the fact that it has only recently reached the required level of influence. It did this by merging and expanding its product portfolio and only in recent years has it appeared in the field as a serious provider and its games have always been excellent in terms of quality and performance.

The company is located in Curacao and is licensed by the jurisdiction. However, it is an international developer that focuses on more than just slots and has grown its portfolio significantly. Today, it has headquarters in Ukraine, Malta, and Germany. Its software and games can be found at online casinos around the globe.