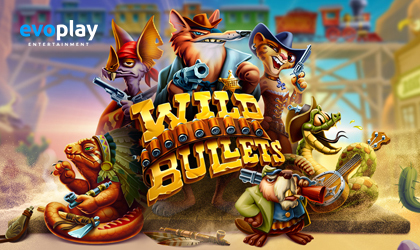 Pioneering game development studio, Evoplay Entertainment, has launched an exciting new Wild Bullets video slot for the upcoming holidays. Straight from the Wild West, the game invites players into a captivating extravaganza with train thefts, cowboys, saddlebags full of gold, and the opportunity for players to win up to 3800x the bet in a gunfight. After the sheriff's secret mission to capture the bandit for breaking the law, players can get multipliers in the Gunfight bonus game. The biggest prize can be won during extra spins, where the total winnings can be increased up to 60 times.

Commenting on the launch, Evoplay’s Ivan Kravchuk, CEO said: “With an inviting cast of characters, sensational symbols and mega multipliers fit for a Sherriff, Wild Bullets is the latest in a long line of gripping Evoplay Entertainment game releases designed for an emerging demographic of tech-savvy gamblers. Having added a thrilling range of games to an innovation-packed offering that is enjoyed by an ever-growing army of fans, it’s been a hugely successful year for our company – and we look forward to delighting our players with plenty of action-packed launches throughout the year ahead.”

Evoplay is a relatively unknown company despite having operated in the casino gaming arena since 2003. This is likely because it has only recently reached the required level of influence. They did this by merging and expanding their product portfolio and only in recent years have they appeared in the field as a serious provider and their games have always been excellent in terms of quality and performance. The company is operating under Curacao and Malta gambling licenses. However, it is an international developer that focuses on more than just slots and has grown significantly portfolio. Their most famous titles are Epic Gladiators, The Great Wall Treasure, The Emperor’s Tomb, Clash of Pirates, Totem Island. Today, Evoplay Entertainment has its main headquarters in Ukraina, but also they operate from Malta and Germany as well, where their creative development team is focused on building slot machines and other online casino games. The brand was established in 2003, and since then it has grown significantly. Thanks to its impressive library of games, this company has managed to find the way into many well-known online casinos that provide services in different markets around the world.