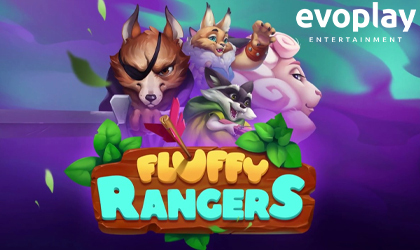 Evoplay Entertainment continues to deliver this year with the release of Fluffy Rangers.

The new slot game brings an interesting story, a bunch of relatable characters, and a…

…set of features that will make the whole experience that much more memorable. Fans of immersive games are in for a treat with this release!

The developer’s latest is a fun title that is packed with everything you would expect from one of  its slots. There is a solid story, a great set of features, and of course great graphics.

After all, the supplier is…

…known for using a lot of 3D solutions in their games. This latest release is no different. The game takes place in the middle of a forest, in a settlement where the tournament is being held.

There are several characters who…

…are competing for the title of ‘Knight of Rabbitland.’ The background is rather immersive, which can be attributed to subtle yet tasteful animation. That being said, the supplier’s visual trademark is located on the reels. The team behind this game went with card suits for the lower-paying tier, while the higher paying tier comes in the form of the game’s main characters. What sets this title apart from most others is the fact that every character is animated.

The 5x3 slot that offers a fairly potent base game experience. Those who are looking for something more can enjoy one of this game’s several special features. Namely, there’s the Ranger Symbol Collection Zone that allows players to collect unique ranger symbols. Once each ranger’s stack is filled, a letter will be opened.

Unlocking all of the letters will spell out SPINS and will unlock the bonus spin mode of the game. All things considered, the new release offers plenty of opportunities for a decent score. Even though the game requires a fair bit of luck to trigger the bonus spin mode, doing so is well worth the effort.

The modern iGaming industry is a fairly saturated space. However, there’s always room for innovation. Evoplay joined the industry in 2019 and has already made a name for itself. The company is well-known for its use of advanced 3D graphics in its titles, but also the pioneering of VR technologies. So far, the brand has dropped a streak of successful games that have proven their worth in various key markets around the world. Despite being so young, it has managed to put together a considerable distribution network that includes a few top tier names.